Eating can be fun, gross, adventurous or boring, but most importantly, it is all about devouring enough energy to live life. This is a big undertaking for an Apex Predator. What do I mean by an Apex Predator? An Apex Predator is the animal at the top of the food web.

Food web? A food web is a massive network of feeding organisms. Sometimes it’s easiest to imagine a tiny critter being fed upon by a kinda small creature, that’s fed upon by a medium animal, that’s finally preyed upon by an Apex Predator. Each time a creature feeds upon another, the energy held within the body of one is passed to another.

Since the food web is about one creature passing energy on to another, a good question to ask is, where does energy begin? Yup, the sun! Really, it’s the plant-like organisms that work magic (photosynthesis). They use nutrients, water, carbon dioxide and the sun’s energy to create the first bite of food.

Whether we are talking about grass, algae, trees or fungus, it’s this life form that can be mashed, chewed up and swallowed by other critters. Energy is now available to move on up the food web, eaten by one animal and then another until it reaches the tippy-top with the Apex Predator.

Whether the Apex Predator is you, a shark, a polar bear or a sea otter, you are dining on a whole chain of past meals.

Oh, it’s an honor to be the powerful Apex Predator. We don’t have to worry about being hunted.

However, it is so important for us to see the value of all of the creatures that added up to your last meal and your next meal. Let’s say you have salmon on your plate. Without the plant-like organisms, the bugs that feed on them, the small fish that gnaws on the bugs and the salmon that chows on the small fish, we’ve got nothing.

Part of being an Apex Predator, particularly because we are ones with big brains, means that we have the power and responsibility of paying attention to all other creatures. We wield great power, power so vast that we can influence different parts of the foods webs that make our life so incredible.

We all have to eat, but unlike most other creatures, we can be stewards, guardians, protectors, of healthy futures. Part of this means that we pay attention to what we eat, where our food comes from and what we can do to ensure that we are going to have a yummy and healthy meal tomorrow.

This is not me asking you to look at the world as though you can volunteer your time to save other creatures. Oh no. I’m talking much more than that. You can do that kind of activity any time that you want to, but I want you to look at the next animal that you bump into and ponder how and the heck it makes your life in the highest tower of the food web possible.

Don’t hesitate to think that our connections to these creatures are wild and vast, because the food web is a wild place.

Sometimes decisions are really easy to make, especially when it’s about keeping yourself safe.

Let’s say that your favorite desert is just across a pond, but the pond is frozen. In my case, the carrot cake would be beckoning me to slide across the ice and cram each tasty bight into my mouth. 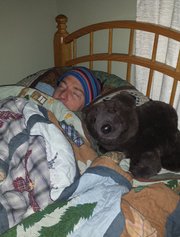 In a split second we can figure out the threat and guess the chances that the threat will happen.Hold on a second! How thick is the ice? Crashing through thin ice could end with a week in bed, sickness . Maybe worse!

Now, let’s say that the ice is a little thicker. Hmmm. Maybe you have a some doubt that you can grab the goodie, but the carrot cake has you wonder if you can make it. Maybe luck would fall in your favor…the carrot cake could be a heartbeat away.

The threat of cracking through the ice is still the same for both situations – you in bed sick. However, the chances of the threat happening go down as the ice gets thicker.

When do we see carrot cake on the other side of a pond? I’ve never seen it, but it gets our minds to how we use our common sense can also weigh the chances. When we include the chance of a threat happening into our thinking we are weighing our vulnerability.

It can be easy to get caught up in the worst case situations – really big threats.

As a climate scientist, I often times I catch myself thinking about some pretty frightening situations. For example, if all of the ice on the planet, built up in glaciers and ice caps like Antarctica, melt sea level all over the planet would rise well over a hundred feet. Most coastal cities would be covered, except for the tops of buildings. Whoa, scary!

Right there is a big threat, I’m very confident that all the glaciers on planet earth are not going to melt during our life times.

Sigh of relief on that one, but there is a far greater chance that sea level is going to rise by a few feet over your life time. This may be tiny compared to 100 feet, but over 100 million people currently live at less than 3 feet above sea level!

I’m not sharing this to paralyze you with fear. Yup, the world can change in really big ways, and we have to rise to the occasions of the threats with the highest chances of happening!

I don’t know about you, but life is a careful balance of identifying threats, figuring out which ones we should worry about and then take action.