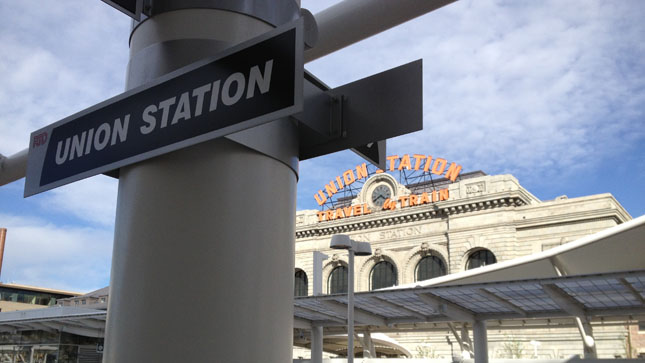 There are several vantage points from which to spy the existing Union Station facade through newly constructed skylights, window openings and the above around pavilions. This view from tracks 5 and 7.

Union Station was the home Friday for a day-long ceremonial opening, replete with everything you'd expect as Denver celebrated its future transit hub. The day was marked by a ribbon cutting, official speeches, music, games, and - of course - a beer garden.

An airy and colorful space, the $500 million transit center is an all-service transportation hub. It's home to the end of the line for the Mile High City's light rail lines, three current and four more set to come on line by 2018.

The newly renovated Union Station connects to newly constructed platforms by a pedestrian bridge and a series of underground tunnels. The Union Station and Wewatta pavilions, two of three primary entrances to the new underground bus concourse, provide access between the street and the concourse. Two new smaller pavilions - platforms two and four - allow light rail commuters access to the bus terminals below.

Operation of The new 18th and 19th Street MetroRide, a free commuter shuttle begins May 12. It is expected to shave several minutes of the 16 block route that currently serves the 16th Street Mall.