A Man Of The Land, A Photographer In The Sky 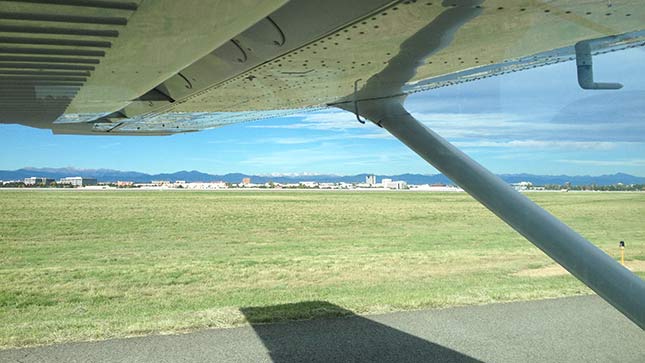 The view from inside aerial photographer Evan Anderman's Cessna Turbo 206.

Anderman at work. The Cessna is placed on autopilot while he captures images of the landscape below.

Cattle pens, as seen from the sky above northern Colorado, with numerous shades of brown and black the result of dirt, mud, excrement and animals.

Evan Anderman understood the land around him differently than most growing up. He was after all, the son of a geologist. Years later, his perspective has grown increasingly distinct and separate from the ground. That's because he's an aerial photographer. “I love how the cattle are just little dots like that,” said Anderman in his Cessna Turbo 206 high above the Northern Colorado landscape. Surrounded by the majestic, and often photographed, Rocky Mountains Anderman chooses instead to focus on those ‘little dots’ and the myriad other shapes that only distance affords.

“I decided I could go up to the mountains like everybody else and take pictures up there but I kind of like solitude anyway and I like getting away from people and this is more subtle,” he said.

Anderman, like his father, became a geologist. In 2005, after nearly two decades in the field, he took that deep connection to the land and shifted course, pursuing his passion for photography. Anderman has worked full-time as an artist since.

“Yep sometimes I'll just cruise along with my elbow out the window just checking things out,” said Anderman.

His inner Sunday driver embraced, Anderman has the luxury of traveling at more than 100 miles an hour with little regard for what’s in front of him - er, below him.

“It’s hard to find any place out here that hasn't been influenced in some way by man,” Anderman said.

From Springfield, Colorado to the Pawnee Buttes, Anderman’s most recent three-part photography series focused on farmland, energy and feedlots. The aerial images collected while soaring above more than a dozen cities or towns.

“What I've been focusing on out here is that land use and what we're doing and how that might affect the land on a more permanent basis,” he said.

A cacophony of shapes and array of colors – linear, circular, serpentine, browns, blacks, and even green are the result of humankind’s overlap of the natural landscape.

Once he has identified a subject, Anderman puts the plane on autopilot seizes the camera hanging from his neck, opens the window, leans out and clicks.

That birds-eye view is something others might not experience. He said there is a definitive difference between terrestrial and aerial vantage points.

“It feels more significant when you are on the ground because [an object] is sticking up in front of the horizon where as from the air it feels like a little spot and more of the land patterns become important around it,” muses Anderman.

The result of all those shapes and spots, he said, is “a subtle beauty.”