Over A Lifetime, Art Is Where You Make It. Even A Hotel Lobby 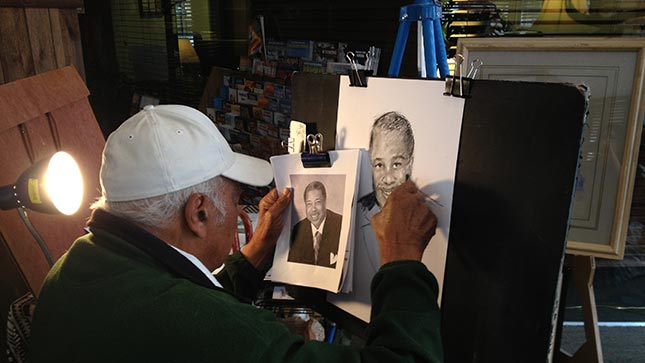 Artist Jess DuBois at work in his ad-hoc studio space - a Ramada Inn lobby on East Colfax Avenue in Denver.

'Red Cabin' by Jess DuBois among the landscape paintings he said people often say they recognize but it's actually from his mindseye.

A charcoal drawing Jess DuBois created inspired by his affinity for jazz and blues music.

Artist Jess DuBois created this work on a cigarette paper.

Jess DuBois in front of his studio on Welton Street, which has been shuttered, at least temporarily, because of a mold problem.

Some of the many works in Jess DuBois' Welton Street studio that may be destroyed by mold.

Inside the lobby of this particular Ramada Inn, among oversized lounge furniture and decorative plants, are the makings of an ad-hoc studio: A charcoal pencil, an easel, and few clip lights. For now this is artist Jess DuBois’s workplace. DuBois is in that lobby thanks to a burst water pipe. That and a subsequent mold problem pushed him out of his longtime studio in Denver’s historic Five Points neighborhood. This is the third time in his near 60-year career pieces of his artwork have been destroyed by flooding. This time could prove the most devastating.

DuBois’ life’s work – hundreds of pieces - paintings, prints, sculptures and more are all nestled inside of his Welton Street studio. Some works were immediately decimated by the water, mold may be causing others to deteriorate.

He is undeterred by the adversity.

“I continue to work,” DuBois said. “I try not to let anything stop me from creating.”

It seems little has stopped him, even at 79-years-old DuBois estimates he creates three pieces of work a week.

That vast body of work has been recognized by multiple arts organizations including Denver’s Black Arts Festival. In bestowing him with a Lifetime Achievement Award, the festival commended his ability to “project the soul of his subjects onto canvas.”

Although known for capturing that soulful quality in his portraiture, landscapes eventually became a significant part of DuBois’ body of work. It was a decision that was met with skepticism from some who told him to stick to what he did well.

“Well, then that made me more determined to do landscapes and still-lifes and other subjects,” DuBois said.

In contrast to the exactitude required in portraiture, DuBois said he enjoys the freedom associated with landscape painting. He often mixes favorite mountain communities into those placid settings.

In addition to his work as a painter and sketch artist, DuBois is also a sculptor. He was hired to immortalize groundbreaker Dr. Justina Ford, the first African-American doctor licensed in the state. The sculpture stands atDenver’s 30th and Downing light rail station.

In between his visual arts pursuits, DuBois also dabbles as a musician, playing spoons and drums. While seemingly disparate, he said his range of interests have shaped who he is as an artist.

“So all that I incorporate into what I am doing now: Blues and jazz players, large murals, landscapes, portraiture, sculpting, whatever,” DuBois said.

Whether he gets to pack up his impromptu hotel lobby set-up and return to his Welton Street studio to continue these pursuits will be determined by the results of mold testing. While the mold could be remediated, the damage to his art work cannot.

“It’s definitely a setback but I still keep going,” DuBois said. “I’m not gonna’ give up and feel sorry for myself. I gotta keep going. This is my life.”