Ready For Art From Robo Renoir Or A PC Picasso? 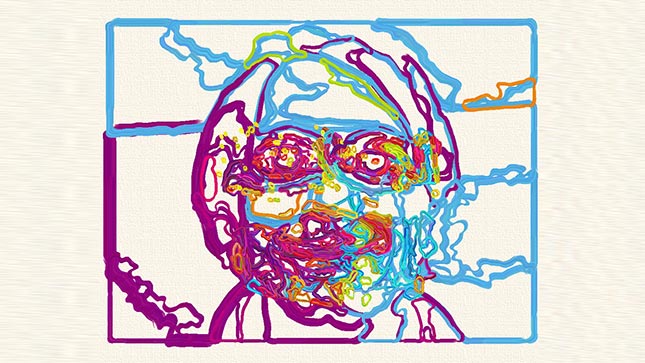 'Emotionally Aware' is among the many works created by The Painting Fool computer program created by Simon Colton.

Computers have been designed to take over mundane tasks. But can creative expression be programmed too? A new study found the majority of people think so. Colorado’s art scene? Not so much. The Pew Research study found a combined 51 percent of respondents believe computer programs will be as effective as humans at creating art It may surprise you that our future techno overlords are already making art.

British computer scientist Simon Colton created The Painting Fool to simulate the physical painting process and hopes it will eventually be regarded as an artist in its own right.

“I learn a great deal from well-meaning criticism, as this drives me forward, so that hopefully one day you will be happy to call me a creative artist. That's all I want!,” said The Fool (read that in your best robot voice).

The bulk of The Fool’s work is digitally generated to look like pencil, pastel, and paint – and later printed out. The result has received some critical acclaim and has been exhibited in galleries in both the physical and digital realms.

But Ivar Zeile, owner of one of the most cutting-edge art galleries in Denver, CO, said he won’t be exhibiting work of The Painting Fool, or any other computer-programmed “artist,” any time soon.

“To me that’s a gimmick. It’s nothing more,” said Zeile, owner of the Plus Gallery. “Real artists want to create new paths. Things that I think have a greater sense of personal dynamic.”

“I think technology has come far enough to be a much more useful and valid tool in the hands of artists,” Zeile said. “And I would say that is something that has developed maybe just within the last five years.”

Kristin Stransky is among those artists who have embraced technology. Her first solo exhibition is opening soon at the Plus Gallery. Titled common/myth, it explores digital recording mechanisms.

“I’ve been working on, and so have many other artists, integrating that technology into that more personal form,” Stransky said.

An adjunct professor and Emergent Digital Practices MFA candidate at the University of Denver, Stransky used a 3-D printer to create pieces she regards as wearable computing. In this instance the piece is an elaborate headband called Emotiscan.

“Putting electronics into something that we can wear, or put it on our bodies, I feel like kind of lessens that coldness and makes it more approachable because it becomes something that is more integrated into your being and your consciousness and your awareness,” Stransky said.

“If software has no skill, it won't be able to create anything of value; if it has no appreciation of what it is doing, or the work of others, it will never understand the value of its work; and if it has no imagination, it will never be more than an avatar for its programmer,” reads an explanation posted online.

For its part, The Fool regards Colton as its teacher.

“Simon and others have been developing AI [artificial intelligence], graphics and vision techniques which have enabled me to exhibit increasingly sophisticated behaviours as I paint,” states the Fool.

Despite The Pew findings, Zeile said it has a long way to go before The Painting Fool can be considered an artist.

“Real artists want to create new paths,” Zeile said. “Things that I think have a greater sense of personal dynamic. And what is it that drives them to do it? That’s the arts sprit.”