When You Put The Public In Art, Opinions Go Way Past Yes And No 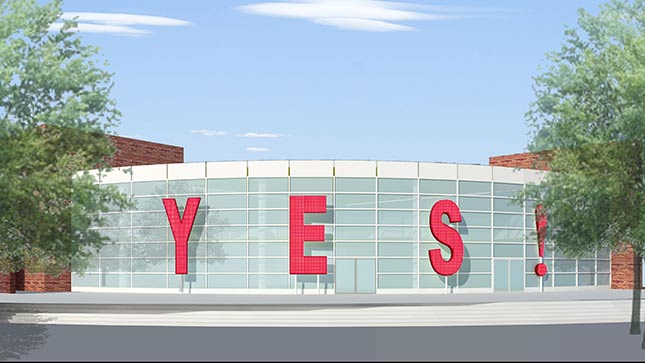 R&R studios' artist rendering of its public art piece "YES!" The project was scrapped by the city after intense public criticism.

Artist rendering of "YES!" from inside Boulder's Main Library branch.

Public art has a long history of sparking controversy. Take the case of the recently repaired Washington Monument in D.C. Now iconic, it weathered funding issues, warring political factions stealing building blocks, and the public rejecting a first attempt. A proposed art installation in Boulder can now relate to the sting of public rejection. Public comments, mostly negative, abounded in Boulder after the city announced it had selected “YES!” as its newest public art work. Following that, Boulder’s City Manager Jane Brautigam scuttled plans for the piece slated for the front of the Main Library branch.

Still, the city is adamant its reversal is about public art policy, not public distaste for “YES!”.

The city’s interim public art policy dictates the selection process, which included eight months of public meetings by the Boulder Arts Panel to review 367 proposals, and subsequent approval of “YES!”, designed by Miami-based R&R studios, from the Library Commission, the Arts Commission, and Brautigam.

Despite those measures, Patrick von Keyserling, City of Boulder communications director, said it seemed the public didn’t know an art project was in the works.

“What we’ve discovered coming out of this process was the community at large may not be following public art on a day-to-day basis, such as the arts commission might be, or a panel,” von Keyserling said.

As a result, von Keyserling said the city will adjust its public art policy to include additional opportunities for public comment.

More than 60 residents voiced opinions to the city and more than 50 letters to the editor and online posts were sent to the Boulder Daily Camera in response to “YES!.” The work consists of big, bold, internally illuminated red capital letters that spell out Y. E. S. followed by an exclamation point.

“I suggest sticking the artless “Yes!” on Colo. 93,” read Ellen Flannelly’s letter to the Daily Camera, “just outside the city limits, of course, since the city prohibits billboards.”

A letter from resident Dee Montalbano read in part, “It is not art; it is defacement.”

“I don’t know how or what we could have done to involve the public more,” Salim said. “And I don’t know that until the piece was chosen and people had a strong feeling about it one way or the other whether they would have participated anyway. It’s a sort of a chicken and the egg question.”

Public art in Colorado – and elsewhere – has often drawn public criticism.The Eiffel Tower, built to commemorate the 100th anniversary of the French revolution, was one such work Salim referenced.

“No one liked that when it was put up,” Salim said. “It was supposed to be for a World’s Fair and there for 10 years. And now you can’t see a movie about Paris without seeing a shot of the Eiffel Tower. I mean, they wouldn’t even consider it. How would people know that it was Paris?”

“You can’t please 100 percent of the people,” Miller said. “That’s why it’s important to have a variety of different types of artwork in a public art collection so that everybody can find something that they love.”

Even though R&R studios also created the "All Together Now" sculpture in downtown Denver, their outsider status drew the ire of several Boulder residents. That’s a notion Salim regarded as shortsighted.

“It just seems a little provincial to me to only look internally for those things,” Salim said. “And you know sometimes we can’t see the forest for the trees, I guess, and somebody’s perspective from the outside can be really valuable to us as a community.”

The $150,000 budget for the project was another negative for some. Matt Chasansky, manager of the City of Boulder Office of Arts and Cultural Services, said 80 to 90 percent of that money would have been spent locally.

“When you spend on public art you are not just simply handing over a check to someone in Miami that gets spent in Miami,” Chasansky said. “These artists were looking to hire local fabricators, local electrical workers, concrete contractors, even engineers. They were going to spend their money at hotels and restaurants while they were in town.”

Despite the resounding public opposition to “YES!,” the $150,000 set aside for a public art project in Boulder could possibly be used for a future work. If, and when, it comes time to select a new work Anna Salim hopes the public will engage in that process at the outset.

“If any positive thing has come from this it is that our community is having a really robust conversation about public art and that was not the case before,” said Salim.