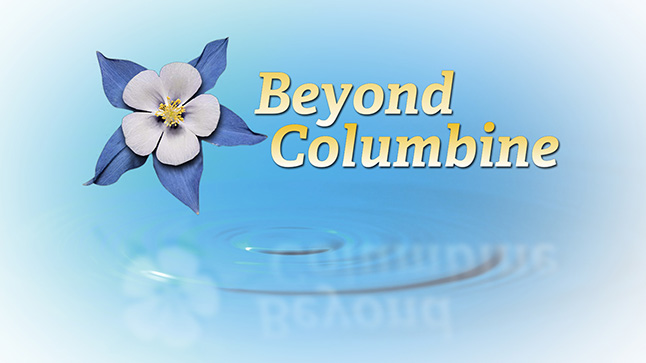 Please join us for an evening of conversation and reflection in:

It was an event so shocking, the nation still needs only one word to refer to it 20 years later: Columbine.

As the 20th anniversary approaches on April 20, Rocky Mountain Public Media takes you Beyond Columbine. RMPM is offering a multi-faceted programming and public engagement series, taking an in-depth look at the national impact Columbine has had – not only on our school children, but for victims of other gun violence, in the realm of mental health, and on our art and culture.

The series also will feature:

See Columbine in a different light.

In the 20 years since Columbine, nearly a quarter million kids in America have been at school during a shooting -- more than 6,000 of them in Colorado alone. The gun violence has left scars you can see, like those of Lance Kirklin, who was shot at the school in suburban Denver. And those you can’t see, like those of Heather Martin, who was hiding in the school choir office when she and others were rescued by a man she still calls “her” SWAT officer. Ripples of Columbine is a three-part documentary special (3x30) from Insight with John Ferrugia at Rocky Mountain PBS, looking at what America has and hasn’t learned in the 20 years since one of the worst school shootings in U.S. history. The ripples of that tragedy continue in both positive and negative ways, and go far beyond those who experienced it first-hand.

In the 20 years since the mass shooting at Columbine High School, survivors have been on a journey of recovery. Hear, in their own voices, how the events of that day continue to ripple, even now, in their lives and the lives of their families. Learn what they want others to know about the journey and how to keep going. And while they continue to deal with both physical and psychological scars, theirs is a message of hope.

After the Parkland school shooting, some wondered if anything had changed since Columbine. Much has. We follow the story of a SWAT team member who had to make the horrible decision to either save 60 kids hiding in the Columbine High School choir office, or go rescue one person who was bleeding to death. What was learned at Columbine helped save lives seven years later when a gunman entered another Colorado school. The same SWAT officer was there. And he trained school leaders across the nation. The lessons failed at Parkland. But they worked last year when the SWAT officer’s own daughter found herself trapped in the Thousand Oaks, CA, Borderline Bar & Grill by a gunman who killed 12 as she texted with her dad while hiding in the attic.

Conversations of Columbine (Airs Thursday, May 2 at 8pm)

The gunmen behind at least 40 other mass shootings have said they were inspired by Columbine. Each time a mass shooting happens, Americans take to their corners on gun control and mental health. We talk to two brothers, both trauma surgeons who specialize in gun wounds. They also each own guns and shoot together regularly for sport. But even they have wound up on opposite sides of the gun control debate, showing how informed, rational people can have differing views. We delve into the data on school shootings to learn what’s true and what’s not. We meet the psychologist who reluctantly became perhaps the country’s leading expert on school shooters, who describes what we’ve learned about preventing them. And we meet a school shooter who represents the majority of school shooters: not on a rampage, but a reaction.

The Caliber of Healing

A one-hour documentary that explores the long-term impact of gun incidents through the personal stories of three Coloradans whose lives were forever changed when a bullet created lifelong paralysis.

Featuring personal stories of healing, this documentary explores how three Coloradans have dealt with the lifelong changes that come with a spinal cord injury inflicted by a bullet. From a drive-by shooting, to an accidental shooting, to a mass shooting, discover how each of them dealt with the physical, mental and financial impact, tackled forgiveness, and explored alternative treatments like acupuncture and massage to help in their journey of healing.

Gun violence at Sandy Hook motivated the creator of RAWtools in Colorado Springs to put his Mennonite faith into practice, addressing gun violence locally and across the nation through smelting of surrendered guns into workable garden tools. Plus, Columbine was the impetus for a Denver man to ask what he can do to promote peace. Today, he brings a new message to schools in Colorado and across the globe through the teachings of Dr. Martin Luther King, Jr.  The multi-faceted musical performance, "At the Table with Dr. King," explores King’s life of challenges and victories; and how answering the call for a deeper life purpose can serve our community and promote peace.

On April 30, RMPBS is hosting a series of community conversations in Denver, Colorado Springs, Pueblo, Grand Junction and Durango.  During these facilitated conversations, we will seek to humanize and illuminate the ways in which our community and state have been impacted in the last 20 years. Utilizing a moving segment from our upcoming series, “Beyond Columbine,” we will partake in a conversation, sharing our personal stories in the time since Columbine.

"I was a teacher in 2013 in Georgia, far from Colorado or any connection to Columbine. We had a required Active Shooter Training during a faculty meeting that morning, as most schools now require the principal to bring in an expert from the local police station to hold this type of training for employees. We listened quietly and attentively. As I walked back to my classroom to get ready for the day to begin, I realized that I was the only one on my hallway that was single and without children. Everyone else had a spouse and/or a dependent. I asked myself, “Am I willing to go first?” Of course, the answer was yes, but that was not the question that I was prepared to answer that day. The bell rang, the teenagers came into my classroom, and as I watched them enter, I asked myself the same question, giving myself the same answer. I thought, “I didn’t sign up to be a police officer; I signed up to be a teacher.” The reality of the decision to become a teacher in this era was profound. It seemed to ring in my ears all day. The ripples of Columbine, and the shootings since, have been felt in all corners and crevices of our nation. I felt that ripple 14 years after the event, far away in Georgia, and it had quite the crippling effect."

With friends, family and neighbors, participants will be supported in sharing their individual ripple of Columbine stories.

In addition to the broadcast elements, online communities will be encouraged to join the conversation with #BeyondColumbine. Thoughtful prompts, content snippets, localized data, and community stories will build into our complete digital strategy with a separate microsite and focused social media execution.

All of the “Beyond Columbine” content will live on a microsite on our website at: www.rmpbs.org/beyondcolumbine. The site will feature all four documentaries and the Arts District content, supplemental video interviews of Columbine survivors, text stories, photos, digital videos, an interactive graphic of all school shootings nationally since Columbine, and the chance for people to discuss the content.

"My ripple of Columbine was attending an Active Shooter Training as a teacher. As I walked back to my classroom, I realized that I was the only single, childless adult in my hallway. Everyone else had a spouse and/or a dependent to go home to. So, I asked myself, 'Am I willing to go first - to sacrifice myself?' The answer was yes... but that wasn't a question I was prepared to answer that day. The reality of becoming a teacher in this era was profound, and it seemed to ring in my ears all day."

“My ripple of Columbine is thinking about my son entering a school setting. Now that I am a father, I am very aware of these types of horrific tragedies. To this day, I still look back at those events, and it scares me.”

"Since Columbine, I have seen how firearm violence continues to generate tremendous fear in our society: fear that ourselves or our loved ones will be victims of violence or fear that our right to bear arms might be restricted. This fear often inhibits our ability to have respectful and productive conversations. As a physician, educator, and citizen I look forward to discussing the data and our personal experiences with firearm violence to help address our fears so that we can achieve better outcomes.”