Posted by Alexa Corcoran on 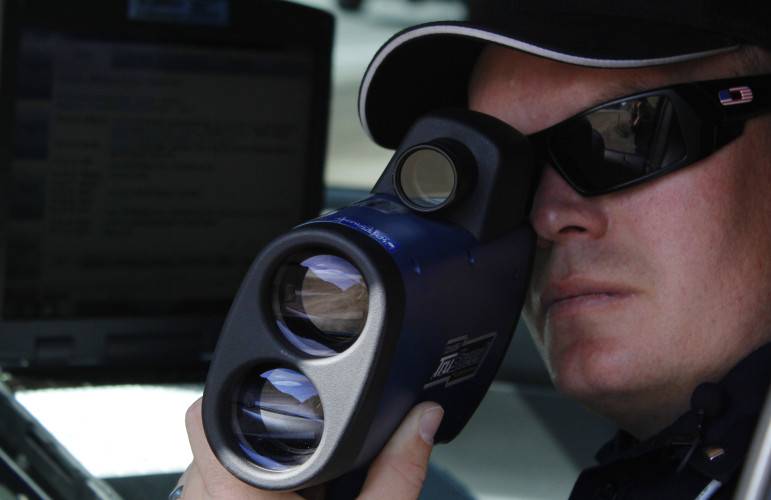 Her toddler balanced on her hip, Ashlee Lucero approached the Mountain View municipal courthouse earlier this month to ask the presiding judge for community service. She was still unable to pay off a traffic ticket she received last September.

“I was in jail for a whole day,” said Lucero, a 23-year-old single mother from Thornton. “A misunderstanding happens and they take me to court for it and I am still trying to pay for this ticket.”

Ashlee Lucero talks about struggling to pay a $80 traffic fine and an added $130 in fees issued last September in Mountain View — a six block by three block town tucked between Denver and Wheat Ridge. When she missed a payment on the fine, Mountain View issued a Contempt of Traffic Court warrant for her that led to a night in jail. She said she lost her job because of that. Mountain View\’s reliance on traffic fines and fees is second highest in Colorado.

Final records for 2014 were not available, but in 2013 ticket revenues generated $621,099 – more than half of Mountain View’s municipal budget. As a percentage of total, that’s more than ten times more than most Colorado communities earn from traffic tickets and related court fines.

Rocky Mountain PBS I-News, in collaboration with 9Wants to Know, analyzed 270 municipal budgets in Colorado. Of those, 230 cities and towns reported revenue from traffic tickets. Only 40 municipalities earned more than 4 percent of revenue from citations.

Of those 40 towns, Mountain View had the second highest percentage of revenue from fines, 53 percent in 2013.

Ashlee Lucero found herself caught in Mountain View traffic court after being stopped on Sept. 11, 2014 and ultimately cited for “defective tires,” though the police report shows she was pulled over for “unreadable temporary tags.”

To date, Lucero has paid $130 dollars towards her ticket. The original citation was for $80.

After her original citation, Lucero was fined at least $130 in service fees and court costs. According to her court records, she was given a $155 payment due date for mid-February, after making a $55 payment in November. Even though her next payment was not due, she was summoned back to court in December. When she did not return, Mountain View issued a warrant for her arrest citing “Contempt of Court Traffic.”

Lucero was pulled over on the warrant in Adams County on Jan. 22 and spent the day in jail. As a result, she paid a $75 bond, but lost more than money.

“I lost my job,” Lucero said, and that led to more trouble. “We’re back at my mom and dad’s house now because I lost everything.”

During the April 15 hearing, Judge Mark Pautler did not acknowledge Lucero’s request for community service.

According to traffic ticket data provided to 9Wants to Know and Rocky Mountain PBS I-News, Mountain View’s most common tickets were seat belt violations (847), red light violations (372) and “obstructed view” (274) which can include cracked windshields or anything hanging from a rearview mirror. There were seven defective tire tickets like Lucero’s.

Just five towns in Colorado earned more than 30 percent of revenue from fines and forfeitures in 2013, the
most recent complete data available. Statewide, fines account for four percent of municipal budgets on average.

“We’re very careful about what tickets we write, and that our officers are doing what they should be doing,” Kiddie said. “I don’t think we’ve done anything other than enforce traffic code and laws that are on the books.”

University of Colorado Denver professor Lonnie Schaible, who works in the School of Public Affairs and studies policing practices, said that there are multiple concerns when municipalities rely heavily on traffic tickets for revenue.

“I think most police would tell you that we are in a constant state of non-compliance when it comes to traffic and driving,” Schaible said. “We are almost always doing something that we could be pulled over for.

“I don’t think that traffic tickets are the answer to traffic safety, in general. There’s no real evidence that you might not get the same effect handing out warnings or placing a dummy car,” Schaible said. “It might damage relationships with the public, who respond, ‘OK, well why aren’t the police doing something else?’”

But in Colorado towns where ticket revenue accounts for more than 30 percent of the budget, police and city officials insist the efforts are focused on public safety – and there often isn’t much else for police to do.

“It’s not about making the town money,” said Morrison Police Lt. Anthony Joiner. “We have never once been asked by the town board to bring in more money. It’s safety first. We answer calls, but last year we had under 500 calls for service. So during regular time, the officers are patrolling.”

The U.S. Census reports Morrison’s population at 428, but with 146 of those residents in the Bear Creek Care and Rehabilitation Center. The police force has more than 20 full-time, part-time and reserve officers. The town’s all black cruisers and SUVs are often seen along U.S. 285 in Turkey Creek Canyon or on SR 470 with multiple arrays of safety lights flashing.

In 2013, fines accounted for 52 percent of the town’s total revenue. Police Chief Rudy Sandoval attributes this to the major highways his department is responsible for monitoring, and said the practices are fair.

“We only write violations that, in my opinion and in most states and most jurisdictions’ opinions, are public safety violations,” Sandoval said.

Morrison’s policy is that police will only stop and ticket those drivers exceeding the posted limit by more than 15 miles per hour, said the chief.

“We are considered a speed trap,” Lt. Joiner said, “but you can’t argue 15 miles over.”

Some lawmakers and civil rights advocates fear that when a community relies on traffic tickets and fines as a major revenue source it can lead to trouble.

Cleaver has proposed federal legislation that would not allow communities to generate more than 30 percent of their revenue from fines and court fees. The bill was inspired by a U.S. Department of Justice report on Ferguson, Mo., in the aftermath of the police shooting of Michael Brown last August and widespread unrest, that found police were stopping citizens to increase revenue for the city.

“They were having a situation where they were creating taxation by citation,” the congressman said. “The police department was used as some kind of fundraising group. We can’t allow that to go on.”

Yet one prominent spokesman for Colorado cities and towns said federal legislation is the wrong way to go.

“I just think that, for the Congress or for the state legislature to place limits on that, we would be very resistant to that,” said Sam Mamet, the executive director of the Colorado Municipal League.

“This is something that’s in the purview of local control,” Mamet said. “And so in our smaller towns, this could become an important revenue source for them. If the community has said, ‘We want traffic enforcement to be something significant you do in your police department, chief’ –  it should be left to the community.”

“Basically, the police department pays for the town,” said Campo police officer Brad Viner, who is currently the only member of the department. Last year he wrote 400 traffic tickets.

Traffic tickets in Campo comprised 93 percent of the town’s budget in 2013. That was more than $300,000 for the town of 107 people. The town relies on tickets. Without them, said Mayor Tim Grey, services would be significantly reduced.