A Watched Pot: What Is The Most Energy Efficient Way To Boil Water?

What is the most energy efficient way to boil 500 milliliters (about 2 cups) of water? And which method has the smallest carbon footprint?

This question comes to us from Ben Silverstein in Maryland. Silverstein is a tea kettle enthusiast –  he owns a collection of more than 70. Why is Silverstein so fascinated with tea kettles? He sees them as the intersection of form and function, of engineering and art. And the familiar act of boiling water lets us examine how the choices we make daily roll up to global energy consumption.

What is boiling, anyway?

Before we get to your kitchen, let’s review exactly what boiling means: Boiling is when water goes from a liquid to a gas. At sea level and standard air pressure, we have to heat water to 212 degrees Fahrenheit (or 100 degrees Celsius) before it boils. Head up to Denver, Colorado –  Inside Energy’s headquarters, at 5,280 ft above sea level –  and we can boil water at 203F (or 95C). On top of Mt. Everest, 29,029 ft above sea level, the boiling point drops to a cool 160F (or 71C). Go uphill, and that pot of boiling water gets colder. Why? The higher you go, the lower the air pressure. This makes it harder for humans to breathe, but easier for water molecules to turn into water vapor. Taking this to the extreme, if an astronaut brought a thermos of water on a spacewalk and opened the lid, it would boil instantly in the vacuum of space. But it wouldn’t get hot. And it wouldn’t make a very good cup of tea.

But for simplicity’s sake, let’s return to Earth and a sea-level kitchen.

In our kitchen, we need to get those 500 mL of water from room temperature (21C) to boiling (100C) by adding energy –  165,000 Joules (or 0.046 kilowatt hours), to be precise  – in the form of heat. Remember, energy comes in many forms: heat, electricity, food calories, nuclear energy, electromagnetic energy (light), etc. Every time we move energy from one form to another, or from one place to another, we lose some to the world around us (once again, “Damn that rising entropy!”). We’re looking for the most efficient way to turn energy from the form it enters our house (usually electricity) into heat, and the most efficient way to deliver that heat into our water.

We can represent this with a simple formula: 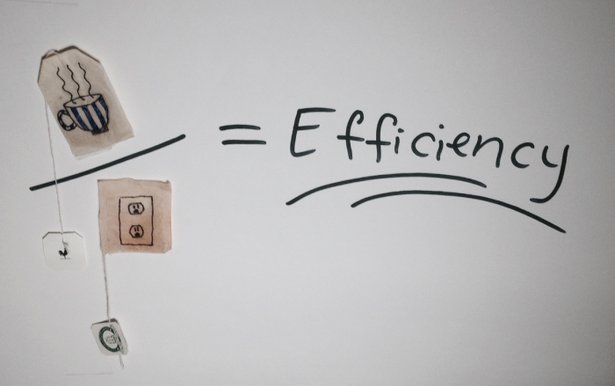 For appliances – microwave, electric tea kettle, electric stovetop – the most efficient appliance is the one that can boil water while pulling in the least amount of electricity via its plug.

Inside Energy spoke with Tom Williams, a researcher at the National Renewable Energy Lab, to break down the rough efficiencies:

When it comes to electric appliances, the induction stove is the winner. (However, these are still a rarity in most homes, and they only work with magnetic cookware.) The electric tea kettle is a close second. Not all kitchens – or all kettles –  are the same, so keep in mind these estimates vary.

What about that carbon footprint?

So if a Washingtonian and a Wyomingite each make a cup of tea using an electric tea kettle, the Wyomingite’s tea will have the larger carbon footprint.

How carbon-heavy is your state’s electricity? Find out on this map: 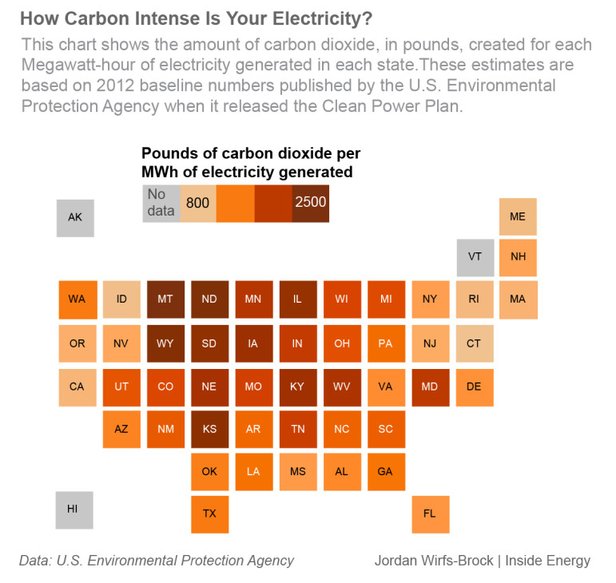 But what about a gas stove?

A gas stove burns natural gas directly, cutting power plants and electricity out of the picture. Much of that energy goes to heating the air around the flame, and doesn’t make it into the water. Tom Williams, of NREL, says that the efficiency gains you get from burning natural gas directly are offset by the inefficiency of the flame. Thus a gas stove rivals an electric stove in terms of its efficiency, at around 70 percent.

The most important factor: your behavior.

How often do you boil exactly the amount of water you are planning to drink? Consider this: You want to drink a nice, steaming two cups of water. Say you put your tea kettle under the sink and run the water for a while, ending up with four cups in the kettle. Boil that on an electric stove, and you’ll use roughly 0.13 kilowatt hours of electricity. But put exactly two cups in the microwave and you’ll only use about 0.092 kilowatt hours of electricity – even though the microwave is less efficient than the stove. When it comes to energy efficiency, your boiling habits are more important than your choice of appliance.

Or, as Tom Williams puts it, “As soon as humans can interact with something, we mess it up.” We often boil more water than we need, using more energy than we need. We also do things like leaving the stove or microwave running after the water has already reached a boil.

To put this in perspective, American drink about 662 million cups of coffee and tea every day, according to National Coffee Association and the Tea Association of the USA – that’s about two per person. If, for each of those cups of tea or coffee, we boiled a whole pot, we’d use about four times more energy than we actually need.

Beyond your kitchen, why does boiling matter? 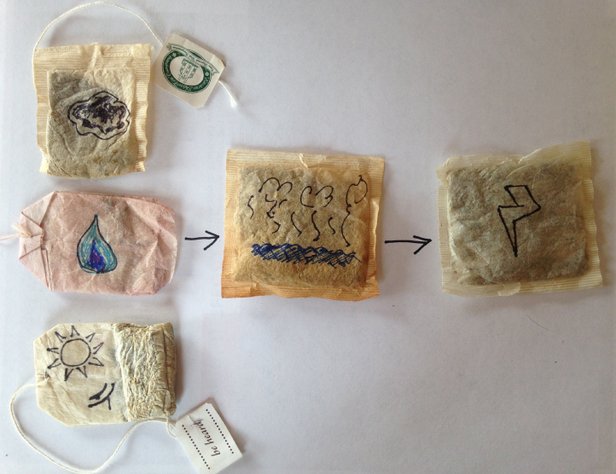 “Engineers have been working on making that process more efficient for well over 100 years,” Williams said.

A coal-fired power plant takes thousands of gallons of water to produce electricity, said Mark Wilson, senior manager of generation assets for Tristate. From a “cold start”, it could take 16 hours for that water to get hot enough to make electricity, he said. And as we explained in a previous post on transmission loss, approximately 65 percent of coal’s raw energy is lost at that point. The longer it takes to bring that water to a boil, the more valuable coal is wasted.

There have been large improvements in efficiency in the last decade, Wilson said. Making higher pressure steam, for example, generates electricity more efficiently. But cutting down on that energy loss is an ongoing struggle, he said.

It’s a problem that even the Massachusetts Institute of Technology is trying to answer. In October 2015, engineering graduate student Jeremy Cho published a study on a new method to control water’s boiling with the flick of a switch.

A system like this would allow power plants to ramp up or down quickly and efficiently, Cho told MIT News in October.

We’ve only covered the first few bubbles in the rolling boil that is energy. Ever tried to boil water outside, using the power of the sun? Curious about whether it’s really possible to superheat water in a microwave? Submit your questions – about boiling water or any other energy topic.