Chalkbeat: Will Republicans push for change in Colorado schools? 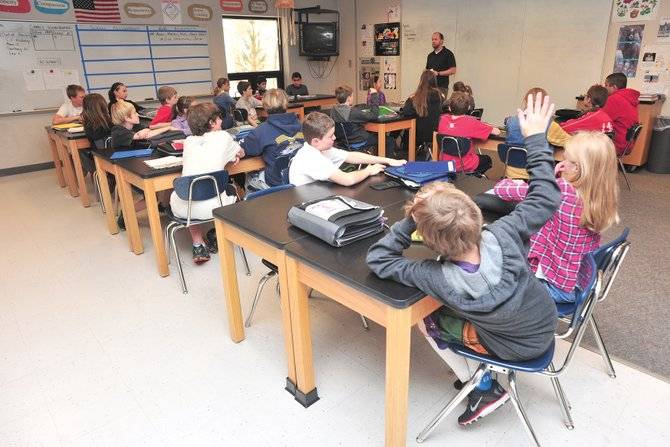 Colorado Republicans and education leaders yearning for more control over public schools may get their wish under a Donald J. Trump presidency.

Trump has said little about his education priorities. But what crumbs he has dropped along the campaign trail have local Republicans intrigued — especially those who want more flexibility when it comes to the nation’s new education law.

"I'm a tremendous believer in education,” Trump said in a campaign ad. “But education has to be at a local level. We cannot have the bureaucrats in Washington telling you how to manage your child's education."

The lack of specificity in Trump’s education agenda has left many school leaders and lawmakers scratching their heads and guessing about what’s next for the nation’s 98,000 public schools.

“Public education was not a focus for the Trump campaign and we don’t know if his views on federal education policy will emerge as a priority,” Kerrie Dallman, president of the Colorado Education Association, the state’s largest teachers union, said in a statement. The union endorsed Hillary Clinton, Trump's Democratic opponent, who won Colorado by about 3 percentage points.

For the last 16 years, since the George W. Bush administration, the nation’s schools have been governed by strict accountability laws at the federal level. But the Every Student Succeeds Act, or ESSA, bipartisan legislation signed by President Obama in 2015, was supposed to change that.

ESSA significantly scales back the federal government’s role in education but still requires states to hold schools accountable for the educational performance of students, especially those who have been historically underserved.

But there’s so much ambiguity about how Trump’s administration might enforce ESSA that in Colorado, the State Board of Education has given the education department an extra month to finish work on its plan to roll out the law here.

The 2016 election did not alter the balance of power in Colorado's General Assembly. Democrats maintain their hold on the House, and Republicans still control the Senate. Still, some players are exiting the scene and political winds are always shifting, and debates about state testing, accountability and other issues could flare up again after a quiet 2016 session for education policy.

Significantly, partisan control of the State Board of Education remains up for grabs. As of Friday morning, Republican Debora Scheffel was just barely holding off Democratic challenger Rebecca McClellan in the race to represent the 6th Congressional District on the board. More votes must be counted, and officials in Adams County — one of three counties that comprise the district — say their results will not be updated again until "early next week."

With three Republicans and three Democrats holding the other seats, the outcome will determine who controls the board.

Steve Durham, a Colorado Springs Republican who won reelection to the state board this week, said he believes Trump’s education department will provide the state even more freedom when it comes to accountability, teacher quality and testing.

"It fits right in with Colorado’s model of local control,” said Durham, the board's current chairman. “So we should take advantage of any opportunities."

Durham, along with other members of the state board and officials at the state education department, cried foul when the Obama administration released proposed guidelines to ESSA. They pointed to several instances where they believed regulations overstepped the letter and spirit of the law.

Some education reform advocates worry that a Trump administration might turn a blind eye if states either fail to meet portions of the law or subvert it.

“While the law is very clear about states reporting how different groups of students perform on standardized tests, I’m very concerned that the department of education isn’t going to enforce it,” said Van Schoales, CEO of A+ Colorado, which champions reform policies such as teacher evaluations and charter schools.

Schoales said Trump’s jarring language about African Americans, Latinos, immigrants and women leave him worried that the federal education department will lose its muscle to protect those students.

“One of the most important roles of the federal government is to ensure that states are making sure the rights and protections for any group of kids, regardless of background, are protected and we have data and information around them,” he said.

Last year, 10,000 students filed a record number of complaints with the U.S. Department of Education's Office of Civil Rights. In Colorado, one recent high-profile investigation found that school leaders in the Adams 14 School District had created a hostile environment for Latino students and teachers.

Michael J. Petrilli, president of the Thomas B. Fordham Institute, a conservative think tank, said less regulation is a pretty sure bet.

“If you can make a case that it’s going to be legal under the reading of the law, I’d be surprised if anyone in Washington is going to stop you,” said Petrilli, a critic of Trump.

But Petrilli feels assured the most important safeguards, such as providing data about how students of different backgrounds are performing academically and requiring states to come up with school improvement plans, are written into the law, which isn’t likely to change.

“We’re not going to go back to a day when you could hide the performance of schools," he said.
Susana Cordova, deputy superintendent for Denver Public Schools, said a change at the U.S. Department of Education should have little impact for the state's largest school district. She said the Denver school board is already using the state's local control laws to chart the course for the district.

"For more than the past decade, we've had a superintendent and school board members who have been willing to say what's important and to hold ourselves mutually accountable to the needs of all students," she said.

Cordova acknowledged that DPS has had systemic issues of racism. And in one instance, a federal court stepped in. But she's confident in the current direction of the school district.

"Our current board of education has embraced the belief that to do right by all of our students, we must have a very high bar," she said. "We frequently don't reach it, but we will not lower our standards regardless of what happens. The consequences are too dire."

Michelle Murphy, executive director of the Colorado Rural Alliance, said she now sees greater opportunity for the state’s smaller schools to get flexibility they feel they need to improve their schools.

“All of the restrictive regulations that came out and that the Colorado Department of Education criticized, that we criticized, are very much in play now,” Murphy said.

A Trump administration, she said, could provide more flexibility around accountability and testing.

Kirk Banghart, superintendent of the 180-student Moffat school district, said he and his fellow rural superintendents, who regularly call for more autonomy from state and federal regulations, are taking a “wait-and-see approach.”

“We’re always looking for that ability to have local control and meet the needs of our students,” he said. “We’re always hopeful with any administration.”

Moffat voters overwhelmingly supported Trump. He won the county with 81 percent of the vote.

Still, Banghart, who is helping to write the state’s ESSA plan, said many of his district’s frustrations will persist through a Trump administration if state laws aren’t rolled back. Between 2008 and 2012, many of the state’s most ambitious education reform laws were written to comply with direction from the Obama administration.

He said for Colorado's rural schools to truly have the flexiblity they need, the state will need to rethink some its current laws.

"The ability for local decision making based off the context of a community,” Banghart said, “is the best way to improve student outcomes."