Dan McMinimee out as Jeffco superintendent, ending awkward period after board vote to search for replacement 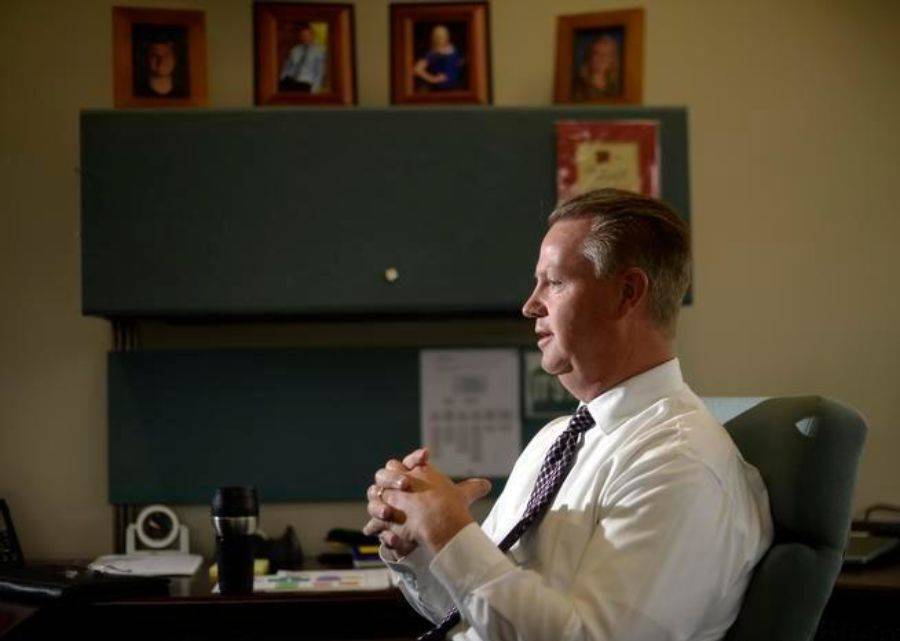 JeffCo Public Schools Superintendent Dan McMinimee, at his office, in 2014 during his second week on the job.

Dan McMinimee has stepped down as superintendent of Jeffco Public Schools effective immediately, but will take an advisory role through the end of his contract, the district announced Thursday.

The announcement portrayed the move as a mutual decision of McMinimee and the school board, which voted nearly two months ago to launch a search for a new superintendent while allowing McMinimee to finish out his contract.

“The Board thanks Dan McMinimee for his service and commitment to Jeffco Public Schools and wishes him the best in his future endeavors,” board president Ron Mitchell said in the released statement.

Mitchell said that after the board’s vote to start a search for a new superintendent, the parties “felt pretty good,” but then, “I think that became somewhat uncomfortable for Dan.”

“It became apparent there are distractions in terms of what my focus is moving forward,” McMinimee said. “With some of the pressures, I have trying to secure another position.”

But he said the change should be a benefit for him and for the 86,000-student district, the second largest in Colorado.

“Making sure the day-to-day operations are being taken care of is everyone’s priority,” McMinimee said. “It just felt like this was a great opportunity.”

McMinimee’s precise role in Jeffco until his contract ends June 30 is unclear. The release said McMinimee would serve in an “advisory capacity” and will “assist as needed in the transition.”

McMinimee said Thursday that he and Mitchell will work out the details of the “special projects” he will work on during the next few months.

But he won’t stick around past June, either. Earlier Thursday, the School District 27J in Brighton announced Elliott would be principal of the district’s new high school. The role starts July 1.

McMinimee was hired in the summer of 2014 by a split board. A year later, the three members who approved McMinimee’s hire were recalled.

The newer Jeffco school board voted in January to start the search for a new superintendent, and a firm just completed public meetings to get input about what qualities they should look for in candidates. The job is being advertised with a base salary of $300,000.

When the board voted to launch the search for a new superintendent, board members said they didn’t have specific problems or concerns with McMinimee’s performance but wanted to see if they might find a person who could be better for the job.

According to McMinimee’s contract, if he is released before his contract expires at the end of June, he is to receive a year’s worth of his base salary, which is $220,000. If McMinimee chose to break the contract to leave on his own, the district could charge him for damages.

The school board held a closed session Feb. 16 to seek legal advice about the superintendent’s contract, according to the district. No details of that meeting were made public.

It’s not immediately clear what agreement the board reached with McMinimee. The district’s announcement said the board will vote on a new agreement at their March 9 board meeting. The agreement is not to be released before it is signed and finalized, according to McMinimee and Mitchell.