The call crackles over Officer Richard Jones’ police radio as he is patrolling the streets of Pueblo in March of 2018.

“They give me a description of a white male sitting outside the building and they think he has a handgun on him,” Jones says.

As Jones gets out of his car and walks toward the man, he sees him turn with a gun in his hand. The officer has his own gun out and leveled. 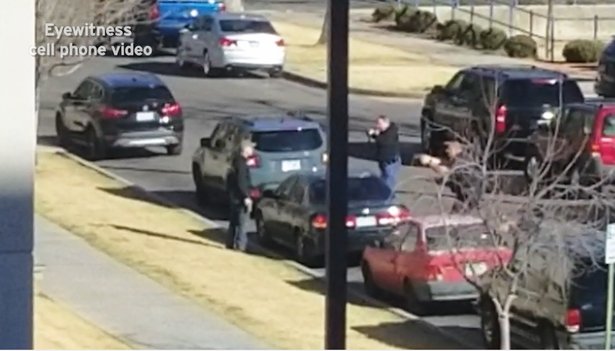 An eyewitness captured cell phone video of the standoff

So begins an agonizing 11-minute standoff as Richard Jones, his body camera recording every second, faces an armed man in the midst of a mental health crisis. He yells at the police officer to kill him.

“He's got a thousand-yard stare,” Jones says. “He's not looking at anybody.”

Jones begins screaming at the man to drop his gun, hoping to jar him out of his mental haze. He notices the man is wearing a sweatshirt indicating he is a veteran. The officer, a crisis intervention instructor, begins using his training to find a “hook,” some way to connect.

The man responds, telling Jones he can get no help for his condition. He wants to die.

“Just shoot me!” he screams.

As the standoff continues, other officers arrive at the scene, taking cover behind nearby cars.  They all have weapons pointed at the man, ready to fire should he raise the handgun from his side toward Officer Jones. 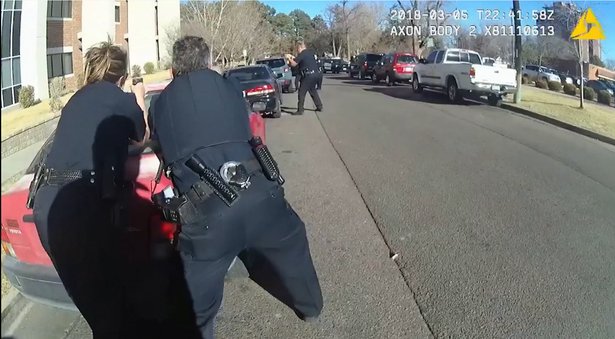 Suddenly the man grabs the gun with both hands, as if he is about to raise it. Jones tenses but continues to focus on trying to get through to the man in crisis.

"Just shoot me!” the veteran screams.

Then Jones tries again to connect with his personal story.

“I was in your shoes a few months ago brother,” Jones tells him in a calmer voice.

Then the officer, who says he is a man of faith, tries a different avenue.

“The Lord sent me to you here today, OK? He didn’t send one of these other guys... He sent me, as a vet, to you, to help you because I’ve been there,” Jones said.

As officers watch intently, the man raises the gun from his side and ejects the magazine and then ejects a bullet from the chamber of the gun. He had been locked and loaded, ready to die. He raises his arms in surrender.

While the other officers take the man into custody, Jones walks across the street where the relief is overwhelming. His camera rolls as he sobs and he realizes that he has succeeded in not having to kill a fellow veteran in crisis. When he calms himself, he goes to the man and hugs him, assuring him that he will get help. 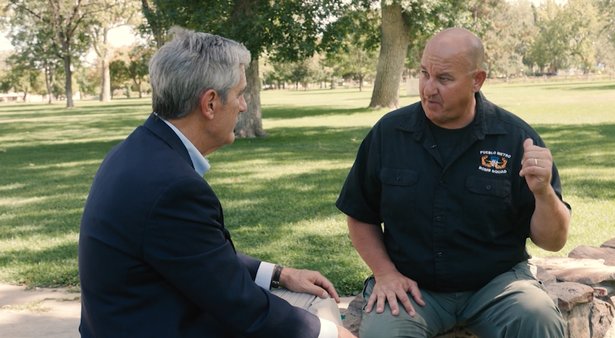 Even so, Jones says later that he was prepared from the first moment he got out of his car to shoot if he had to because public safety was at risk. But he says it is providential that he responded to the call.

Jones says the confrontation with a person in a mental health crisis is a daily occurrence in Pueblo.

“There's days that we're one after the other, after the other,” said says. “I mean this is normal. We deal with a lot of these cases. And we get a lot that have weapons with them.”

Jones says it is an issue that affects everyone's safety, not just those who need mental health services.

“It is part of our job,” he says. “But I can't do a burglary in progress because I'm doing one mental patient or party having a bad day after another.”

Jones, like others in law enforcement around Colorado, is frustrated that his efforts make little difference because regardless of what he does there is simply not enough access to care for people in a mental health crisis.

“There's been numerous times that I've been finished, I've left this patient with the mental health counselor,” he says. “I’ve left, gone to the station and finished my paperwork, come back out, and the patient is walking down the street in front of me. There’s no place to put them.”

“This is ridiculous,” he adds. “You know, the normal person doesn't know. You know, politicians don't have a clue. They do not have a clue about it.”