Last Updated by Burt Hubbard on 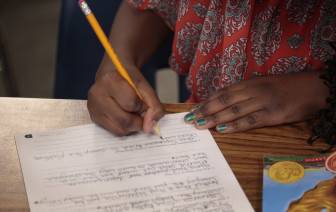 Colorado educators are reworking curricula, retraining staff and adopting new programs to raise the academic skills of their lowest performing students, according to a Rocky Mountain PBS analysis of a decade’s worth of educational benchmarks in the state’s 20 largest school districts.

The districts are also working to narrow achievement gaps that have stubbornly persisted between white students and students of color, and between more and less affluent students. Progress hasn’t been uniform across the 20 districts, all located up and down the Front Range with the exception of Mesa Valley in Grand Junction, but each can point to strides made.

The Cherry Creek School District, on the verge of becoming a majority minority system, increased black and Latino enrollment in Advanced Placement classes and in gifted and talented programs, and launched nationwide searches for teachers of color. The result: Achievement gaps fell, high school graduation rates rose and more black and Latino graduates enrolled in college.

In Denver Public Schools, reading and math proficiency are rising among low-income and black and Latino students through a process of integrating schools in mostly segregated neighborhoods. Teachers and staff are receiving awareness training about biases that may hinder learning.

Even as progress can be demonstrated, however, profound disparities remain. Specifically, the analysis of the state’s top 20 districts by student population found:

“These gaps are the result of decades if not centuries of inequities in this country based on race and based on income and they will take time to close,” said Tom Boasberg, superintendent of Denver Public Schools.

Most school districts have made incremental progress in narrowing the gaps, the analysis found.  Seventeen of the 20 school districts narrowed the gaps in reading proficiency between white and Latino students over the past decade, as have four of the five districts with significant black student enrollment.

But that’s not good enough, said Aswad Allen, assistant dean of Diversity and Inclusion at the University of Colorado Denver’s School of Education and Human Development. Many Colorado school districts need to do a better job of teaching an increasingly diverse student body, he said.

“The kids are the casualties in all of this. The entire system has to take a close look at how teachers can be better prepared to meet the students where they are with all of their diverse backgrounds.”

There are additional inequities:

“It was screaming at us that we had big work to do,” Pilch said. “And it was our responsibility to do it.”

Several districts have stood out in their efforts to close the gaps by changing the way they approach teaching.

The Harrison School District, serving some of the poorest neighborhoods in Colorado Springs, is among the best of the 20 districts in narrowing the differences by race and income in academic achievement. In the district of 11,000 students, 46 percent are Latino, 26 percent are white and 16 percent are black. About 70 percent of all students are low income.

Last year, the district had narrowed the reading proficiency gaps between white students and black and Latino students to 12 percentage points. That was the lowest gap among the five districts with significant black student enrollment, and the second lowest among the 20 largest districts for Latino students.

By comparison, more than half of the 20 districts had Latino-white reading proficiency gaps of 20 to 40 percentage points.

The Harrison high school graduation rate has jumped from 67 percent to 78 percent in the past five years. For the 2013-2014 school year, there was little difference in the rate for white, Latino and black students. The percent of Latino graduates enrolling in college tripled during the same period.

The Cherry Creek School District in parts of Aurora and Arapahoe County does not shy away from issues raised by racial differences and biases, Superintendent Harry Bull Jr. said.

“When you lean in and listen, what you discover is that children have very different experiences as they interact with schools,” Bull said. “A lot of those experiences are predicated on race. You can’t ignore that. You can’t suggest that white culture, this is the norm. We’re saying that every child should have the opportunity to experience a challenging and rigorous curriculum.”

Unlike Denver and other low income, minority school districts, Cherry Creek’s neighborhoods tend to be integrated racially, leading to integrated neighborhood schools. The district only has one charter school.

But the district also has aggressively changed policies and approaches to adjust to its changing demographics, Bull said. The percent of minority students enrolled in gifted and talented programs is on the rise, with results including rising proficiency levels on standardized tests and smaller gaps with white students.

“It’s at a pace that I wish were faster,” Bull said. “I think the work is done when you’re not talking about a gap.”

Denver with its often segregated neighborhoods is seeing some success in raising achievement in reading and math in schools integrated by school board policy or by gentrification.

Overall, DPS, where 70 percent of students are low income and almost 60 percent are Latino, is the most segregated among the 20 districts. While Denver schools have registered some of the largest gains in proficiency among all students, white student proficiency in reading and math has risen faster. The net result: Denver maintains the biggest gaps among the 20 districts and some of the widest in the nation.

One of Denver’s strategies is more integration. It has expanded enrollment zones in northwest and northeast Denver to encompass both Latino, black and white neighborhoods.

Its most successful charter schools, the eight Denver schools of Science and Technology, are intentionally integrated both economically and racially through lotteries.

“Study after study has shown that all kids benefit when classrooms are integrated, that all kids learn,” said Boasberg, the superintendent.

It still has wide gaps, but it made the most progress in narrowing the reading gap of all 20 districts, dropping it by 12 percentage points over the past 10 years. Latino reading proficiency rose from 39 percent to 51 percent. Setting aside money to put in pre-schools into low-income elementary schools was a key to the success, said Chris Barge, director of the Boulder Community Foundation’s School Readiness Initiative.

In the Greeley-Evans school district, high school graduation rates five years ago for Latinos hovered just over 50 percent compared to about 75 percent for white students. Last year, almost 75 percent of the district’s Latino students graduated from high school and the gap with white student had narrowed to 10 percentage points. That was the biggest gain in Latino graduation rates among the 20 districts.

One of the keys was dramatically increasing the percent of Latino high school students enrolled in Advanced Placement courses over the past 10 years, Greeley Superintendent Pilch said.

“We removed all of the barriers,” said Pilch, who became superintendent this past summer after working in the Boulder district.

It helped that the Greeley community rallied around efforts to hike graduation rates, she said.

“It’s going to impact our entire community over and over again if we don’t graduate kids. That’s the reality here,” Pilch said.

“We always have the story of the kid who comes from the deprived background who excels and does well, “ Allen said. “That story is a beautiful story, but I think the question is how do we have whole scale change that impacts the lives of a whole generation.”

Math Proficiency Gaps in the Top 20 School Districts in Colorado vs. Number of Low Income Students

(Scroll to the bottom of the page and use the navigation bar to scroll left to view more columns.)

Reading Proficiency Gaps in the Top 20 School Districts in Colorado vs. Number of Low Income Students

(Scroll to the bottom of the page and use the navigation bar to scroll left to view more columns.)

This is part of Rocky Mountain PBS News’ ongoing project coverage, Race in Colorado. Standing in the Gap examines race in public education in the state. To learn more, visit rmpbs.org/thegap and watch the four-part documentary series on Rocky Mountain PBS.