Jails, Prisons Are Common Repository for Those with Mental Illness 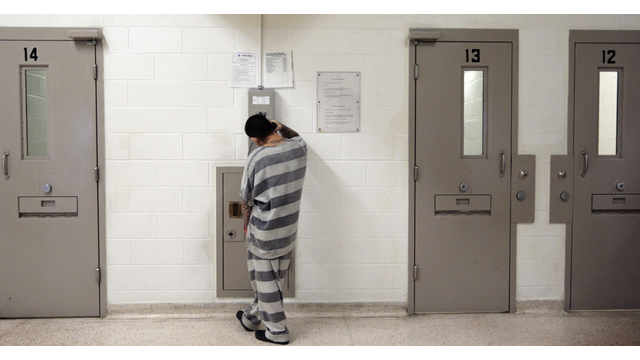 The man in Unit 4-C of the Pueblo County Jail has been in 23-hour-a-day lockdown for a year and a half now. Like most of his fellow residents in what’s known as administrative segregation, he is mentally ill. Brief interactions with the staff are nearly the only contact he has with the world outside his cramped cell.

While a sheriffs deputy keeps watch, an inmate makes a phone call in Unit 4C of the Pueblo County, Colo., jail on April 4, 2014 during his single hour of time out of his cell each day. Inmates with mental illnesses are often placed under administrative segregation in 4C and other parts of the jail where they are kept isolated in their cells for 23 hours a day and their only human contact is with the guards.

As a shortage of funding has depleted options for those in need of treatment for mental illnesses, there’s still one place that can’t say no: Jail. Inpatient psychiatric beds have dwindled to 1,093 for the state’s entire population, according to state human services data, a decrease of 20 percent from five years ago. People with mental illnesses are more than five times as likely to wind up in jail or prison.

Numerous Colorado sheriffs are outspoken in their belief that the mentally ill don't belong in their jails.

“Years ago we deinstitutionalized mental health treatment,” says Boulder County Sheriff Joe Pelle. “People felt it was shameful that we had people in custody or locked up in mental health facilities. Now, instead, we lock them up in jail.”

The burden on jails is growing. A 1992 jail survey found that 11 percent of Colorado inmates had a serious mental illness, according to research by Public Citizen’s Health Research Group and National Alliance for the Mentally Ill. This year, 10 county jails surveyed by I-News reported that, on average in 2013, 18 percent of their inmates were mentally ill.

Sheriffs say that the trend is noticeable from year to year. At the Douglas County jail, for example, the number of mentally ill inmates has grown 10 percent in the past three years, even as the general daily population has dropped 25 percent.

Once they’re in, inmates with behavioral health problems have more trouble getting out. The seven metro Denver counties in 2008 found that mentally ill inmates stayed an average of five times longer than other inmates. In Pueblo, an inmate detained for a misdemeanor stays an average of 28 days; mentally ill inmates jailed for similar offenses stay between 171 and 180 days.

Pueblo Sheriff Kirk Taylor says that the state psychiatric hospital sends its patients to the jail when they lash out or act violently, including people who have previously been found not guilty by reason of insanity. At the same time, Taylor and other county jail officials complain that the state hospitals frequently turn away inmates who are put on emergency mental-health holds because they pose a danger to themselves or others.