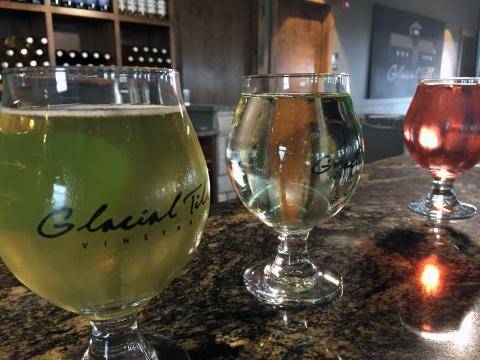 The Midwest is known for a lot of things, but hard apple cider isn’t one of them. At least not yet.

Popular hard cider brands like Angry Orchard and Woodchuck are made on the East Coast. Other well-known brands like Strongbow are made in Europe. Nebraska, however, is now home to a small cider-making scene.

Because hard cider production is similar to winemaking, some vineyards in Nebraska have started adding the venerable beverage to their product list, using capacity that would otherwise be unused to make thousands of gallons of the alcoholic drink.

Glacial Till Vineyards, near the small town of Palmyra in southeast Nebraska, started producing hard apple cider a few years ago after a shaky grape season. Today, it outpaces their wine production. Several other Nebraska wineries have also jumped onboard.

Nationally, hard apple cider has enjoyed of renaissance of sorts over the past few years. Sales growth neared triple-digits just a few years ago and became the fastest growing segment of the adult beverage industry, according to Chicago-based market research firm IRI. That growth slowed a bit in 2015, but is still healthy and is expected to stay strong.

Because of quirky state and federal laws that contradict each other, wineries in Nebraska can produce hard ciders, but micro-breweries can’t without a license to make wine. Most smaller brewers don’t want to go through the trouble, so wineries have the advantage when it comes to hard apple cider, although they can’t sell their product directly and have to go through a distributer.