Rape Kits Can be Hard to Find for College Students

Jada Garber, tall and confident, was entering her senior year at the University of Colorado at Boulder in 2011 when she was forced into a group that she never wanted to join. She became the one out of five women who is sexually assaulted during her time in college.

The man who attacked her, Davin Burke-Reinhart, was convicted on two counts of felony sexual assault in 2012. That made him part of a much more exclusive group. Only about 3 percent of rapists ever spend a day in jail, the Justice Department has found.

Jada Garber stands outside of her Steamboat Springs, Colo., home on Nov. 9, 2014. Garber was entering her senior year at the University of Colorado at Boulder in 2011 when she was sexually assaulted. Forensic evidence gathered helped convict her assailant, but the process was somewhat haphazard because proper sex assault exams are not available anywhere on CU’s campus or in Boulder County.

What made the difference between Garber’s case and thousands of others that aren’t successfully prosecuted?

Foremost, the physical forensic evidence collected in the hours after the attack.

“For the survivor, it’s important for them to know they have been medically cleared, that they are getting proper medical care,” says Booth. “As a prosecutor, the SANE exam often gives us vital evidence that helps us prove fundamental elements of the crime of sexual assault.”

But CU’s 30,000 students can’t get an exam anywhere on the Boulder campus, including the student health center. The exams also aren’t offered at any hospital in the city, or, for that matter, anywhere in Boulder County.

The nearest hospital that offers these exams is in Westminster, 20 miles away. And because waits can be long there at St. Anthony North Hospital, CU advises its students who have been sexually assaulted to go to Medical Center of the Rockies in Loveland, a 50-minute drive on a good day.

“It’s dumbfounding to me, for a place like Boulder County, that we do not have the ability to have sexual assault survivors get a SANE exam done,” says Booth.

Boulder prosecutor Katharina Booth at the Boulder County Justice Center in Boulder, Colo., on Sept. 30, 2014. Booth cites the importance of sexual assault forensic exams, often referred to as SANE exams or rape kits, to the success of prosecuting cases. “As a prosecutor, the SANE exam often gives us vital evidence that helps us prove fundamental elements of the crime of sexual assault.” The exams can reveal invisible injuries and collect crucial DNA evidence that can help put rapists behind bars.

Of the top 100 colleges as ranked by U.S. News and World Report for 2014, only four provide the exams in their student health centers. Twenty-two schools offer them at university-affiliated hospitals, according to a survey conducted by CU religious studies professor Lucas Carmichael and recent CU graduate Nevada Drollinger-Smith.

The Obama administration has called on colleges to do more to help victims of sexual assault.

CU is one of more than 80 colleges under investigation for civil rights violations related to their handling of sexual violence.

Some colleges – and by law, all in California – have enforced a yes-means-yes concept on campus, requiring affirmative consent for all sexual contact, in hopes of decreasing the incidence of assault.

Still, colleges aren’t required by law to provide forensic exams, or to make it easy for their students to get them. In Colorado, only Colorado Mesa University in Grand Junction provides the exam at a hospital adjacent to campus.

College officials say it would be difficult to provide forensic exams on campus. Most student health centers aren’t open at night and on weekends, when many assaults happen.

“Right now, we want to make sure that someone can go to a specific SANE nurse, a 24-hour, well-functioning professional SANE program, to get these exams done,” said Ladd-Webert. “We don’t want someone fumbling through instructions who doesn’t really know what they’re doing to someone who has just experienced a trauma.”

But a fumbling exam, a self-exam at that, was just what Garber got.

Unlike most sexual assault survivors, Garber reported the crime immediately, first to a friend and then at Boulder Community Hospital.

Without trained sexual assault nurse examiners or rape kits on hand, the hospital couldn’t give her medical attention or collect evidence. Instead, she was driven in the back of police car to the Boulder police station. There, she was coached to do her own exam, in a police station interrogation room.

“They brought in a female officer to give me a debriefing on what kind of swabs I needed to be doing on myself,” says Garber. “They gave me a few long Q-Tips, and asked me to swab a few places on my body, and then she took pictures of a few random cuts that I had had and any kind of bruises that I had on my body.”

After all that, the hospitals in Westminster and Loveland were just too far away.

“At this point, I’d already had to experience it, and then tell (her friend) Ben about it, then tell Boulder County (hospital) about it, and then tell the police about it,” says Garber. “And it was kind of just exhausting. We’d been doing it for four hours or so after giving my statements. I think Ben and I walked home from the police station at about 7 in the morning.”

Other sexual assault survivors give up long before Garber did, says Booth.

“I think we miss a large majority of our sexual assault survivors coming forward, getting the care they need or deciding to report to police, because when they’re turned away (from the hospital) they go home,” says Booth. “They crawl back in bed.”

Running 24-hour SANE programs can be costly, says Elyse Diewald, who coordinates the sexual assault nurse examiners at Medical Center of the Rockies in Loveland. 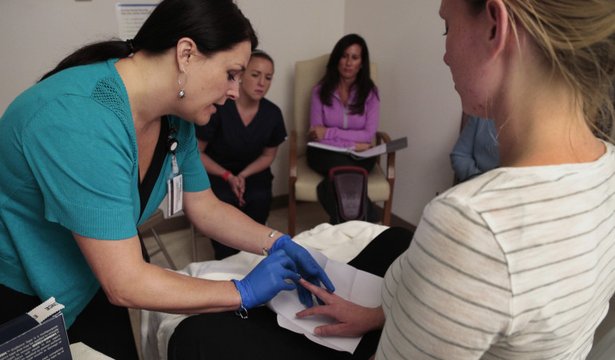 Liz Hardin, center, an emergency department nurse, and Joanne Knuppe, right, an obstetrics nurse, watch forensic nurse Kim Nash, left, trims Emma Agnew’s fingernails as Nash leads a training session for Sex Assault Forensic Exams on Oct. 2, 2014 at Memorial Hospital in Colorado Springs, Colo. For the training, Agnew portrayed a woman who’d been a assaulted. Of the top 100 colleges as ranked by U.S. News and World Report for 2014, only four provide the exams in their student health center. Colleges cite the high cost of training and maintaining a SANE program as reason for not having them on campus.

The costs of training new nurses, paying for their on-call hours and their continuing education add up, says Diewald, to around $150,000 to $160,000 a year. Only part of that cost is recouped through law enforcement agencies, which pay for rape kits under Colorado law.

“But it’s something we do as a service to the community and because these are patients that need to be seen and deserve to be taken care of,” Diewald says.

The Boulder District Attorney’s office is working to bring a SANE program to Boulder Community Hospital. Hospital spokesman Rich Sheehan said that the hospital was working out the costs of offering exams, and hoped to do so by early next year.

Prosecutor Booth says the whole community, including CU, bears responsibility for making sure Boulder residents have access to forensic exams.

A handful of colleges elsewhere have found affordable ways to offer forensic exams on campus.

At the University of Florida in Gainesville, campus advocates found that assault survivors were waiting hours at the university hospital emergency room. So the university used non-profit funding to train nurses at the student health center to give the exams.

The University of North Carolina at Chapel Hill provides its nurse practitioners with the training as part of a “core service” offered to students.

Both schools said they already had most of the equipment and exam space they need to give the exams, though they aren’t offered around the clock.

Like the University of Florida, Colorado Mesa University found that its students had difficulty accessing SANE exams after reporting assaults. Katie, who asked that her last name not be used to protect her privacy, was one of them.

Katie had been attending the university for only two months when she says she was assaulted by an acquaintance on a Friday night in March.

“I woke up in my dorm room, and I just remember feeling really upset, and not knowing what to do,” she says. “I didn’t really know how to respond to it.”

A friend called the police, and the university’s sexual assault response program. But when Katie arrived at St. Mary’s Hospital, there was no nurse available to give her a forensic exam. She had to wait until the next day.

“I just wanted to shower and feel clean,” says Katie.

In August, CMU started paying into a collaborative of on-call SANE nurses to make the exam available at Grand Junction’s Community Hospital, adjacent to the campus. The university says more nurses are needed to make sure students who report an assault don’t have to wait, like Katie did.

Eight U.S. senators introduced a bipartisan bill in July that would require colleges to provide information on their websites about the nearest medical facility offering SANE exams, as well as options for transportation and reimbursement. That’s more than most colleges do now.

Danny Sandoval, who directs CMU’s advocacy and health office, says colleges shouldn’t wait for the law to make the exams available to students.

“You just have to find the resources, you have to be able to get the help of people around you to get this service given to students,” says Sandoval.

He says that universities have been increasingly focused on complying with federal requirements related to sexual violence, and that’s a start.