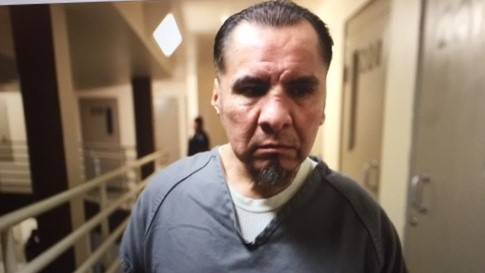 Dressed in a short-sleeved, light gray, jail uniform, Alvin Garnier, 48, deliberately walks across the indoor “yard” at the Denver County Jail on Smith Rd. His short black hair is slicked back on top and his silvery-black goatee, neatly trimmed.  His right ear is missing a lobe.  It was bitten off in a fight.

The father of five has been homeless -off and on- for nearly half his life, but after being arrested this summer for shoplifting and trespassing, he has been spending his days and nights in Denver’s county jail.

As he extends his tattoo-filled arm to shake hands hello, one can see the evidence of the time he has spent within the criminal justice system.

He said he received his ink behind bars.  It’s a life he knows well.   During a recent span of five years, he served 908 nights in jail for various crimes and offenses related to his alcohol addiction.

He was one of the top ten most arrested people in Denver.

TAXPAYERS FORKING OVER MILLIONS FOR A SMALL GROUP OF HOMELESS

During those years, taxpayers spent nearly half a million dollars on jail and court costs on Denver’s ten most arrested people, all of whom were homeless or transient.

The nine men and one woman were frequently cited by police for repeat, petty crimes, many of which included offenses related to drug or alcohol abuse.

Medical and detox services for five of the ten, including Garnier, totaled more than $422,578 during the same span according to medical records shared with and compiled by Rocky Mountain PBS.  Records for the remaining five were not released.

A BITTEN EAR AND A CT SCAN

When his ear was bitten off in 2015 during a fight on the street, his hospital visit included a head CT scan, a chest-xray and a vaccine which totaled $10,312.

Garnier said he does not pay for his medical bills.

According to city research, 250 of Denver’s most chronically homeless individuals spend an average of 14,000 nights in jail, more than 2000 days in detox.  The cost of providing emergency, medical, and jail services for them is about $7 million each year.

City and county officials are hoping a program designed to offer supportive housing to the most frequent utilizers of city emergency services will help ease the financial burden for taxpayers while helping the most chronically homeless people on the streets of Denver get back on their feet.

After an audit found Denver’s decade-long, $63 million plan to end homelessness by 2015, Denver’s Road Home, was not managed effectively and failed to use adequate resources, the city is trying a new approach to rein in costs and make a dent in the chronic, visible homeless population.

In partnership with the Colorado Coalition for the Homeless, Denver has started to implement an evidence-based concept called Housing First.  They first offer housing to the chronically homeless and then provide support for their health needs.

Sixty individuals have already been housed, according to Regina Huerter, the Executive Director of Denver Human Service’s Office of Behavioral Health Strategies.  Construction is underway on a new housing facility, and the goal is to have 250 homeless people off the streets by 2017.

“It’s based on putting people in housing – not based on, ‘you need to get clean first,’” said Huerter.  “We are going to house you and then try to give you the right kinds of wrap around services,” she said.

In 2006, a minor study of a similar, Housing First program run by the Colorado Coalition for the Homeless found an average savings of $16,000 among the nineteen participants in the study, according to Cathy Alderman, a spokesperson for the organization.

The city also looked at research from other cities who pursued similar programs including Chicago, Portland, Seattle, and San Francisco.

Private investors are contributing nearly $9 million to the project through performance-based contracts called Social Impact Bonds. They will only be repaid if the program is able to significantly reduce jail costs while increasing housing stability for the homeless individuals who choose to participate.

While some are skeptical whether the cycle of chronic homelessness will ever go away, Melissa Jones says she believes the concept of Housing First works.

For five years, Jones, 39, has been able to maintain a sober lifestyle in her own home with the help of a Housing First program run by the Colorado Coalition for the Homeless.

Jones, who said she became an addict at age 10 after her mother died giving birth to twins, had been living on the streets, in cars, and on friends’ couches for twenty years.  She was addicted to drugs and alcohol, chemically dependent by the age of 11, and in foster care by the age of 13.

“It was a nightmare, but I didn’t know anything else.”

Jones said she became a “raging alcoholic” and could not get her life together. She spent time in and out of jail and in the hospital receiving treatment for her drug and alcohol issues.

Eventually, she made up her mind that she wanted to accept help and received supportive housing assistance through the Colorado Coalition for the Homeless.  She was able to access mental health care, and support to help her overcome her addiction.

“I was scared to death of having my own place. I had never lived in one,” Jones said. “I was deathly afraid.  Am I going to lose this place again? Am I going to relapse, but in my mind I had already made up that I didn’t want that life and I deserved a better life, and I just kept building on from there.”

While Denver’s Social Impact Bond program will be evaluated by the Urban Institute over the course of several years to determine its cost effectiveness and its effect on housing stability, Jones said the program worked for her only because she had the mindset that she was ready to change her life.

“I think if you put anybody in a housing situation and have all the support system, they’ll do good.  Whether they continue to do good, that’s their own choice.  You can give someone all the services in the world – if they don’t have their mind made up, it’s not going to work.”