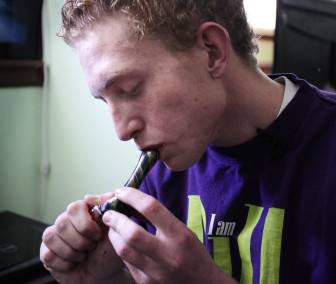 Chaz Moore, 17, lights a pipe with a dose of medical marijuana at his
Joe Mahoney / RMPBS I-News

An attack seizes Chaz Moore’s body, stealing much of his breath. Spasms in his throat, lungs and diaphragm cause the 17-year-old to speak in hiccups, one syllable at a time.

He says it feels like a grown man is jumping on his chest as the muscles in his belly roll like waves.

Chaz Moore, 17, lights a pipe with a dose of medical marijuana at his home in Colorado Springs on Tuesday, Feb. 14, 2012. Moore is one of 41 children under 18 in Colorado who have a medical marijuana license, according to Colorado state records. Two years ago doctors diagnosed him with myoclonus diaphragmatic flutter, an affliction causing muscle spasms in his chest that can recur dozens of times a day. Moore takes various medical marijuana products to treat it.

Chaz opens a jar labeled MMJ, pulls out some fresh green buds and crumbles the marijuana into a small pipe. He lights up the bowl and inhales as deeply as possible through the spasms, turning to blow smoke out his bedroom window.

A second puff, a deep cough and the attack passes.

Chaz is one of 41 children under 18 in Colorado who have a medical marijuana license, according to the most recent data available from the Colorado Department of Public Health and Environment.

And he’s convinced that marijuana is saving his life.

His doctors have told him he is one of about 50 people in the world diagnosed with myoclonus diaphragmatic flutter, an affliction causing muscle spasms that can recur dozens of times a day.

Until a couple years ago, Chaz was a healthy kid, except for some childhood asthma that he was outgrowing. He played in his school band and on a baseball team.

Excerpts from a doctor’s recommendation for marijuana

Chaz Moore, 17, carries this letter from his doctor, Abigail Collins of Children’s Hospital Colorado, in case he is questioned about his medical marijuana.Rationale: “Failure to respond to a host of other medications including Keppra, clonazepam, valium, morphine, Benadryl, Xanax, inhaled lidocaine, Dilantin, Tegretol, Depakote, Flexeril, Artane, IVIG and Solumedrol.

Previously Chaz was taking benzodiazepines while at school for episodes of breakthrough myoclonus which was sedating and ineffective to control symptoms. We now have Chaz on a medication regime which actually helps reduce the frequency and duration of his spells and have found a medication which reliably aborts the attacks (THC) when they occur.”

No side effects: “He has no significant side effects to the THC and is functional on the medication.”

Should be in school: “I strongly recommend that Chaz return to school on his current medication regimen and be allowed to take the THC which has been prescribed by a physician to treat his medical condition.”

Then he started getting hives and the mysterious spasms. At first, the attacks came three to five times a week and his family rushed him to the hospital each time.

Doctors tried treating him for allergies and gave him inhalers, along with high doses of painkillers and anti-anxiety drugs to relax his body.

“One week, we went nine times to the ER,” said his dad, Shan Moore. “We were going nuts, just totally freaking out. Nobody knew what was wrong.”

Doctors in Colorado Springs referred the family to National Jewish Health in Denver, where Chaz had an attack in an exam room. One of the doctors who observed the spasms had treated a patient with the same rare illness nearly 20 years ago.

Chaz finally had a diagnosis and began treatment at Children’s Hospital Colorado, where his pediatric neurologist tried a variety of medications. At one point, he was taking a cocktail of 16 pills three times a day.

The medications would work for a time, but not consistently.

So Shan Moore said he raised an "insane" idea with Chaz's doctor – marijuana. He had seen reports online that it might help some patients with multiple sclerosis.

Moore displays a medical marijuana-infused baked good at his home in Colorado Springs.

The father said he hesitated to consider marijuana in part because his own relationship with the drug goes "way back."
Shan Moore first tried marijuana at age 10, became a self-described pothead and used everything else he could get his hands on. By his mid-30s, he said he was dealing drugs and wound up in prison for three years when Chaz was just 7.

Now 41, Moore says he’s been clean for several years. The last thing he wanted to consider was getting his son started on marijuana.

But the effects of the high doses of the prescription drugs were also alarming. The family decided to give marijuana a try.

Chaz said he had tried pot once before and didn’t like feeling high. Now he rarely experiences that feeling because the family shops for low-potency marijuana.

He has fine-tuned his medication over the last year. He starts each day with edibles like marijuana-infused peanut butter and jelly sandwiches or marijuana cheesecake.

The food has higher levels of chemicals that seem to fend off Chaz’s attacks and stay in his system longer, without the psychoactive effects that cause a high. When an attack strikes, he smokes for immediate relief.

His friends have never hit him up for marijuana, Chaz says, and he believes kids who abuse the drug are harming patients.

“You’re taking away from my medicine,” he said. “Even though you’re out there enjoying it, you’re messing with my medicine.”

Chaz no longer uses any other medications, but the marijuana created a new problem.

About the disease: Myoclonus diaphragmatic flutter

First identified: 1723 by Antony van Leeuwenhoek, who suffered from the disease and invented the microscope

Extremely rare: About 50 cases ever reported

National Jewish case in early 1990s: A 13-year-old girl was hospitalized for eight months at National Jewish Health in Denver. Her illness initially stumped doctors. Psychological experts believed at first that anxiety might have brought on her attacks. But they also occurred in her sleep.

Mystery solved: A member of the team caring for the girl, Dr. Anthony Liu, became convinced that the cause of her illness was physical, not psychological. He finally diagnosed diaphragmatic flutter.

Full recovery: The team decided to try a procedure called a “nerve crush” paralyzing the phrenic nerve that gives signals to the diaphragm. The nerve regenerated.

Quote: “She got a full recovery and the symptoms disappeared. I would liken it to rebooting your computer. At some point, the electrical activity gets out of whack and you have to allow it to regenerate,” Dr. Peter Cvietusa, Denver Allergy, Asthma and Immunologist, now with Kaiser Permanente. Cvietusa was a fellow at National Jewish and was part of the team that cared for girl. He is the lead author of a research paper about her rare condition.

His school district, Harrison District 2, refused to allow the school nurse to give him marijuana. The family switched Chaz to a closer high school, hoping he could walk home when he had an attack, use marijuana and then walk back.

But the family said district officials didn’t like that idea either, telling them they feared Chaz would be impaired and disruptive.

“I was doing fine,” Chaz said. “I wasn’t disrupting anybody. My eyes weren’t red. I wasn’t smelling of pot. I was doing all of my work and wasn’t hurting anyone.”

Last April, after he started having as many as 35 attacks a day, Chaz enrolled in an online school.

Now he said he feels like he’s on house arrest, stuck in his bedroom with a small Dell laptop.

He’s lonely and says he sometimes loses track of what day it is because of the monotony. He’s more than a year behind his peers, but determined to get an education and become a counselor for kids in hospitals.

His dad shakes his head over the battles they’ve fought.

“Medical marijuana saved his life, but ruined it all at the same time,” Shan Moore said.

The family spends about $1,000 a month on various marijuana products and shops at five different Colorado Springs dispensaries. The father and son have become regulars on the pro-marijuana circuit, speaking at conventions.

Being so vocal about the benefits of marijuana has been costly. The father said he lost one job because his bosses didn’t like having such an outspoken employee. He now splits wood and trims trees, picking up jobs where he can. His wife works at a Denny’s.

Chaz is on Medicaid. The father said, altogether, they visited emergency rooms 117 times prior to starting marijuana. Now Chaz hasn’t been to the ER for more than a year and only goes to the doctor for routine checkups.

He doesn’t like marijuana – the taste of the food or the smell of the smoke. He feels guilty using it in the home he shares with his grandmother. He knows the damage drugs can do to a family. Right now, he sees no other options.

“If I couldn’t access marijuana,” Chaz said, “I would probably be dead.”