Voters Will Decide On Strict New Oil and Gas Setbacks

Colorado voters are being asked to decide whether new oil and gas development should be pushed 2,500 feet away from homes, schools, parks, playgrounds, bodies of water and other "vulnerable areas."

The oil and gas industry is fighting Proposition 112, saying it would put much of the state off-limits to new development and cost many workers their jobs. Both candidates for governor, Republican Walker Stapleton and Democrat Jared Polis, have said they oppose the proposition.

Colorado Rising, the citizen-led operation pushing the setback ballot initiative, says it is the only pathway to protection for communities that have tried and failed to impose limits on oil and gas exploration close to neighborhoods.

“If it continues the way that the industry currently plans to do it in our communities, my fear is that I would have to move,” said Colorado Rising’s Suzanne Spiegel, a Boulder resident and supporter of Proposition 112. “We’re talking about a basic regulation that the industry should want if they care about the state of Colorado and if they want to be a good business neighbor.”

But the energy industry argues that the proposed regulation is far from basic and would give them almost nowhere to go.

The industry points to an analysis by the Colorado Oil and Gas Conservation Commission (COGCC), the state entity charged with overseeing the industry. That analysis found 56 percent of the surface land in the state would be off-limits.

“It puts 94 percent of the top five oil and gas producing counties off-limits to new production,” said Dan Haley, president and CEO of the industry trade group Colorado Oil and Gas Association. “You’ll still have wells in Colorado but you’ll see new production trail off very quickly within a year or two.”

“Anything that creates any standard regulation, they try to turn it into a ban. This is not a ban, this is a setback," Spiegel said.

The setback would not apply to existing wells, nor would it apply to federal lands. The COGCC analysis found 85 percent of non-federal land in the state would be inaccessible if the setback passes.

But Spiegel called that analysis an exaggeration, arguing that the industry could still potentially access oil and gas that sits beneath land that is off-limits on the surface.

“The technology of oil and gas and fracking has developed over the last decade and now they can drill up to three miles underground. So they have the ability to access mineral rights from very far away. It’s not convenient for them, they’d prefer not to have to do that, but they can and they should,” Spiegel said.

Haley said that is not always possible in many scenarios, citing surface and geological issues.

“It is not as simple as saying, ‘You can now drill from three miles away, why don’t you go three miles away?’ There may not be a place for us to go and access those minerals,” Haley said. “Our operators always want to go into a spot that is the least challenging when it comes to neighborhoods or anything else, so we definitely want to be as far away from people as we can be.”

Oil and gas producers say a 2,500-foot setback would not only hurt their industry but would also hurt the state’s economy as a whole.

The Colorado Department of Labor and Employment’s latest quarterly data shows there are more than 29,000 direct jobs in oil and gas. The state said that figure does not include jobs in other industries that provide support to oil and gas employers (such as staffing agencies and truck transportation companies) who do not work exclusively with oil and gas producers. 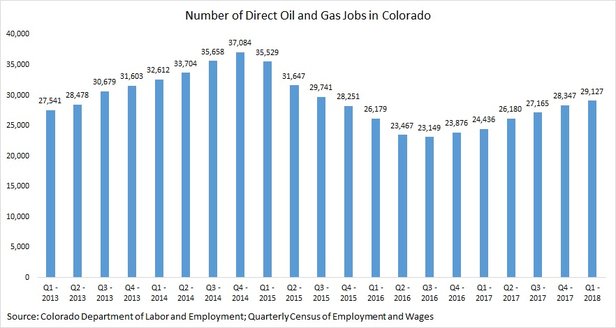 Opponents of the setback proposal have cited numbers showing the industry "supports" as many as 239,000 jobs in Colorado. Haley argues the large oil and gas workforce also creates jobs in other industries – jobs that could be in jeopardy if the setbacks pass.

“This is about hotel workers, restaurant workers, real estate brokers, health care employees. The oil and gas industry is considered a primary employer in Colorado, so for every one job that we have, four to five other jobs are created along the way,” Haley said. “So if something like this were to pass … it would have a crippling effect on the economy overall in Colorado.”

The industry points to a study by the Common Sense Policy Roundtable which estimated as many as 43,000 jobs could be lost in 2019 if the setback passes.

Spiegel said Colorado Rising is not trying to shut down the industry, but rather maintain a livable state.

“We want people to have jobs in this state, but not at the expense of our basic health and safety,” she said. ”The oil and gas industry is a boom and bust industry, which means that the jobs that it creates are very short-term. The damage that it leaves behind is very long-term.”

The potential economic losses would not be contained to employment. A state legislative review of the proposition says if the setback passes it is expected to decrease state revenue from income taxes, property taxes, severance taxes, royalty payments and lease revenue. Property tax paid by Colorado oil and gas producers totaled close to $497 million last year, according to that same legislative review.

“People are still getting sick, people are still experiencing the nuisance of living next to a highly industrial activity,” Spiegel said. “We don’t think that any Coloradan anywhere in the state should have to be exposed like that.”

Colorado Rising has pointed to research by Dr. Lisa McKenzie from the Colorado School of Public Health at CU Denver, focused on the potential health risks posed to those living near oil and gas.

McKenzie said her studies have shown infants with congenital heart defects and children with leukemia are more likely to be living near oil and gas sites. But the researcher also said she is not sure how close is too close when it comes to oil and gas development impacting human health.

“In my view, the exact distance remains unclear.  It also is my opinion that there is not necessarily a ‘one-size fits all’ set back distance.  It would depend on the size of the well pad, [and] other oil and gas facilities and sources of air pollution that may be nearby,” McKenzie said.

The industry has questioned the findings of McKenzie’s studies, and pointed to research done by the Colorado Department of Public Health and Environment (CDPHE) as more comprehensive.

“This setback proposal of 2,500-feet isn’t based on science, it’s based on putting an industry out of business,” Haley said.

The state monitors the air around well sites and collects complaints from the public about health concerns.

“Based on the data we have collected and reviewed, the risk for long-term health effects appears to be low for residents living at distances of 500 feet or greater from oil and gas extraction activities,” CDPHE spokesperson Mark Salley said.

Those on both sides of this debate, and the COGCC, all say a 2,500-foot setback would likely be the largest required by any state.

Proponents of Proposition 112 say it’s necessary. More and more people are living in proximity to oil and gas, as both the state’s population and the industry continue to grow.

“There were over 1,000 complaints last year about the sound, the vibrations, the smells, the constant-ness. People were going absolutely mad in their own homes because of this industry,” Spiegel said.

“When you have oil and gas development in your community or nearby your community there are obviously impacts there. And we are working very hard to mitigate those impacts,” Haley said.

Haley said the industry has taken major steps to reduce the noise coming from wells by replacing noisy equipment in response to community complaints, but Colorado Rising said those changes have not gone far enough.

“It doesn’t make sense to frack right next to people’s homes, playgrounds or schools,” Spiegel said. “This is a fight between real Coloradans and an industry that only has one thing on its mind and that’s money, that’s profit.”