This Month in the History of Rocky Mountain PBS February 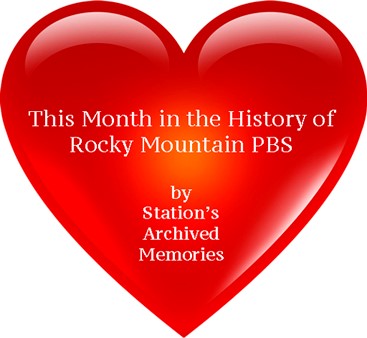 Brought to you by Station's Archived Memories

"Remember that the happiest people are not those getting more, but those giving more."

With this thought in mind in 1997, the Volunteer Board of Rocky Mountain PBS established a heartfelt recognition to be presented annually to one volunteer and one staff member who “give from the heart.”  The award was the brainchild of longtime volunteer, Laura Hoganson.  The award acknowledged individuals who “gave unselfishly of their time and energy” and was intended for persons “who are always there for the station and for others, often working tirelessly in the background.”

The first “From The Heart” award was presented, quite appropriately, on Valentine’s Day, February 14, 1997.  The first honorees were Patty Boyd (volunteer) and Pat Hoeft (Auction staff).  In the beginning, the award recipients were truly surprised when they unassumingly joined the casual gathering of a handful of volunteers and staff to be unexpectedly honored by their colleagues with balloons and flowers.  After nineteen years, the presentation has grown into a well-attended and highly anticipated celebration attended by up to 100 volunteers, staff and guests.

A dilemma arose in 2002, when staff and volunteers were seated for the ceremony as the Volunteer Board had just presented the volunteer award to volunteer, Eleanor McKeeman.  As the staff recipient was about to be announced, the emcee realized there was a major problem ---  the staff honoree was nowhere to be found in the audience!  How could the occasion go forth without the staff guest of honor?  After scouring the entire grounds of KRMA to find the honoree, the volunteers finally located him in the basement and crafted a credible reason to entice the award recipient to go to the 2nd floor. And yes, after several moments of chaos and moving all of the guests up to the 2nd floor, the show went on as the award was ultimately presented to the very surprised (and somewhat embarrassed) recipient, Bill Hix --- who truly had been “working tirelessly in the background!”

Following that experience, future award recipients or their families were told ahead of time (shhhh!) by the award selection committee that they had been selected for the award to ensure their attendance.  Although awardees are now notified of their pending honor so they will be at the party, the element of surprise continues as the honoree’s name is not revealed to others until the day of the party.

The tradition of the Rocky Mountain PBS “family” has been longstanding due to the unique bond shared between the RMPBS staff and its volunteers (aka “unpaid staff"). Now a 19-year tradition, the “From The Heart” award has grown from a casual “Thank You” into a lovely ceremony witnessed by an enthusiastic audience of volunteers and staff.  Light refreshments and heartfelt accolades are shared as the “element of surprise” continues to be the primary and highly anticipated focus of this annual celebration.

Thanks to Station’s Archived Memories (SAM), hundreds of archived photographs allow us to relive great moments of the “From The Heart” ceremonies.  Click on the HEART below to enjoy a brief pictorial review of previous award recipients as you ponder, “Who will be celebrated as the 2015 honored recipients on February 18, 2015?” 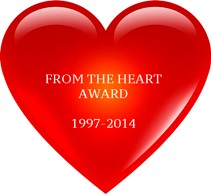