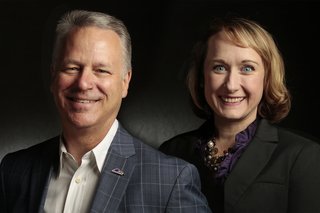 Price's departure from Rocky Mountain Public Media is part of a multi-year succession plan put into place by Price to ensure the continued success of the organization. The transition was triggered in part by the achievement of a financial benchmark in the capital campaign.

“Doug has been a change-maker for RMPBS since he became President and CEO in 2008,” said Dave Leonard, RMPM's Chairman of the Board. “He has expanded our membership base from 60,000 to 72,000 and has increased our visibility and relevancy across the state of Colorado through strategic investment in local programming. We are grateful for his vision and leadership.”

During Price’s years as CEO, he oversaw the analog to digital broadcast conversion, the merging of KUVO and I-News with Rocky Mountain PBS, and the integration of the Gill Center for Public Media in Colorado Springs into the statewide network. He spearheaded the development of award-winning local programs including "Arts District" and "Colorado Experience," and he oversaw the implementation of regional engagement strategies to bring Rocky Mountain PBS programming to life in the communities it serves.

“Doug’s lasting impact on Rocky Mountain Public Media greatly informs the road ahead for the organization as we seek new and innovative ways to engage with the public we serve,” Mountain said. “Now more than ever, the role of public media is crucial to the civic fabric of our state, and I’m humbled by the opportunity to build upon the trust Coloradans have placed in our organization.”

Mountain will be the first female CEO in RMPBS history and is one of the youngest public media CEOs in the country. She has over 15 years of experience in media and has worked in leadership roles at Freedom Communications and Viacom in addition to her six year tenure at RMPBS before taking over at the helm.

“My years at RMPBS were the most powerful and gratifying in my professional life,” Price said. “Among the accomplishments of which I am most proud is assembling a talented leadership team that possesses the skill and vision to carry the organization into its next phase of innovation. The evolution of public media will require vision, creativity, and energy, and our new President and CEO, Amanda Mountain, is the one to lead us into that exciting future.”

To enrich the lives of Coloradans through engaging and essential programs, services and community partnerships that inform, enlighten and entertain.

Rocky Mountain PBS will be the premier public media resource for all Coloradans. On-air, online and in person, we will serve our diverse communities as a convener of people, ideas and perspectives.