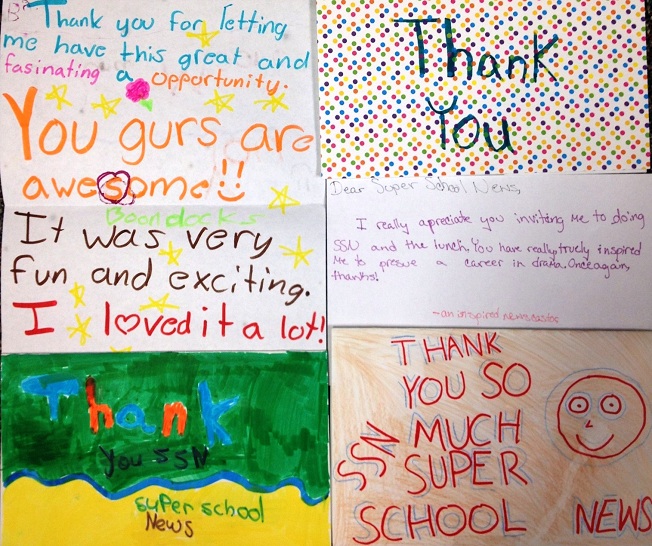 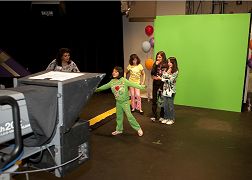 Matthew H. (participated in 1981/82):
I was a 5th grader at Lincoln and can not remember the exact reason I was picked, but I do recall practicing my script over and over. The other reporter was a 6th grade girl (Tasha). She and I practiced in the weeks leading up to the filming. I also recall the red sweaters that we wore, which I thought looked great with my red hair. On the day of the shoot, I was so excited about getting out of school to go down to the studio. All the students that were filming that day were given a tour of the station and then sent off stage to wait their turn. Although only 4 or 5 schools, filming, the wait seemed to last forever. Finally, our turn; the lights were really hot, I only stumbled on one line and the only topic I can remember was about the recent vote to determine a mascot for the school. We decided to become the "Lincoln Lynx." I recall fondly this experience and am happy to share this with you. This is Matt signing off for Super Six School News.

Courtney T. (participated in 1984/85):
Participating in Super Six School news was thrilling for me, from writing the news production to the on-air recording. I later went on to obtain my B.A. in Journalism and Technical Communications (Public Relations) from Colorado State University. So, one could say, Super Six was the launching point of my journalism career. I truly felt honored to participate in such a wonderful and rewarding program. Keep up the good work!

Nathan S. (participated in 1986):
In 1986, I was co-anchor for Bryant-Webster Elementary School on Super School News.  I don't remember my co-anchor's name, but I do remember that both of us worked very hard.  When we came to the studios at (the then) KRMA, we met Mike Landess (then with ABC affiliate KUSA channel 9) and used his lapelpin upside-down so we could look more official. The video-taping went off without a hitch, despite me having the flu  and a fever, and a few weeks later I was on TV! Ever since that time I have been an avid viewer of PBS. 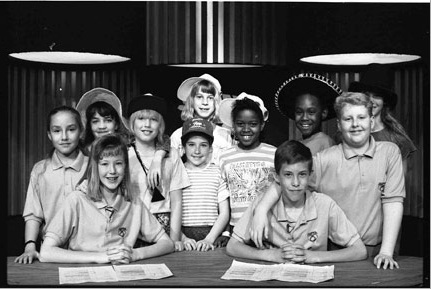 I was a "reporter" on Super 6 School News in 1987, when I was 12 and in the 6th grade.  I remember how much time my partner, Anthony Nguyen, and I spent preparing our news stories and taking photos.  I also remember the studio, and how grown-up we felt when we were given red sweaters to wear on-air! It was a wonderful experience and I'm so glad to have been a part of it.

Derek C., Vanderhoof Elementary (participated in1988):
Derek's parents wrote in saying: We are Derek's parents and saw the bit on PBS the other night.  Derek had so much fun doing Super School News. He was 11 yrs old at the time in 6th  grade.  We have the tape of them doing the news.  Derek (32 years old) is now a Naval officer stationed in Oceana, VA.  He is a back seater in  an F-18 aircraft.  Doing things like Super School News helps egos and lets kids know the sky is the limit with what a person can do.  Great program...keep it up!

Adam S., Bergen Elementary (participated in 1989):
SSSN was one of my first appearances on television and I remember every second of it – from my embarrassed goofy smile face to my juggling outro. That experience introduced me to the world of television and video, and solidified my profession choice.  I ended up volunteering at Channel 6 and eventually worked my way into an internship and then a paid position. Trux Simmons and I grew into great friends, as well as many other SSSN crew members I grew up with.  I participated in Channel 6 Auction, Spirit of Colorado, and many other productions at Channel 6.  The lasting friendships of the crew and the volunteers at Channel 6 will forever be a major part of who I am and how I got to where I am now.  I currently live in Los Angeles and work as a Director of Photography.  Thank you Channel 6 and SSSN for everything!!!

Michael L., Eastridge Elementary (participated in 1990):
Super Six School News was a really cool experience for any 5th grader! I remember being pretty nervous. I felt like I stumbled through my part of the newscast. Luckily, I had a good co-anchor. When I watched it on TV, it didn't seem so bad. I am so glad to hear they are still doing SSN after 30 years. It's a special program and excellent learning experience that I am grateful to have been a part of! 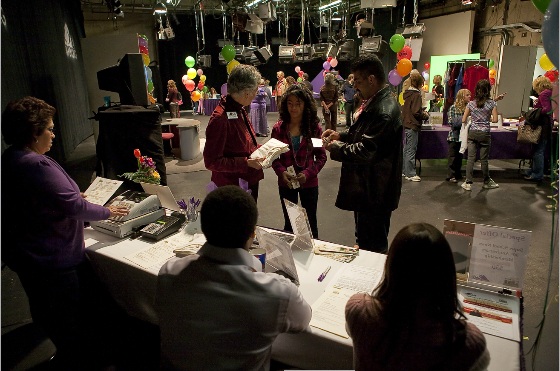 Deidra G. (participated in 1991):
At a recent leadership conference, we had to come up with something unique about ourselves. I proudly announced that in sixth grade, I was on TV as a Super Six School Newscaster. Everyone was surprised and wanted to know more!! To this day, I love sharing that memorable tidbit of info about me. And re-watching my newscast now, I get a pretty good laugh at my "big" teeth and "big" hair!  In fact, when the gentleman is talking on your homepage [video message by Doug Price at rmpbs.org/ssn], I believe that is me in the background on the TV! I remember taking time with classmates to write the script, getting ready for tape day and giving the newscast with my little hands folded. During the newscast, I remember talking about our school wall of fame and starting off that news segment saying "say cheese, smile!" We also talked about classmates seeing giants, "but really, they were only reading fables." Super 6 allows kids to be creative, professional and gives them and their school an honor and the opportunity of a lifetime!

Courtney J. (participated in 1992-93):
Being a Super Six School News anchor opened my eyes to the exciting world of television news.  After high school, I earned my degree in Mass Communications and I am now an anchor and reporter for KJCT News 8 in Grand Junction. I believe seeing a real TV station and getting to meet news professionals at such a young age played a big part in motivating me to pursue my dream!

Jane B., SSN school contact teacher and later a SSN Volunteer, (1995-2003):
Super School News was such a great experience for the children and me as a school contact/sponsor that, when I retired from teaching in 2001, I became a production volunteer for SSN. When my husband retired, we began wintering in Tucson, AZ. Therefore, I was unable to participate. SSN continues to be a wonderful learning opportunity for children . I still look for the student news casts on channel 6 when I am in Denver. They continue to be outstanding. 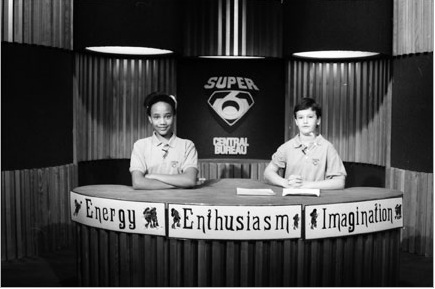 I am a former staff member at Rocky Mountain PBS. One of the best parts of my job involved hosting the Super School News volunteer team in the Education Department. We had the "longest running and largest staff" of any newscast in Colorado. That tradition continues. Super School News provided a calling card to allow us to bring a rich array of services to schools in Colorado, Wyoming ... and even Kansas! Congrats to all the volunteers, students and production staff!

Erin M., Linton Elementary (participated in 1997):
I got the opportunity to be the anchor for the Super School News when I was in elementary school (I think it was 1997). It was such a great opportunity for me, particularly because I had grown up with PBS and was so happy to be involved with the station. I was a bit of an outcast at elementary school, so being a part of the SSN was a great boost for my childhood. PBS meant so much to me growing up. I fell in love with classic novels because of "Wishbone" and I pursued science because of "Bill Nye the Science Guy". I am currently a PhD student in Astrophysics living in Scotland and I owe much of my success to RMPBS. Thank you!

Abby M., Wheeling Elementary (participated in 2002):
I had such a wonderful time at our Super School News broadcast. It was an opportunity of a lifetime. The friends I made and the lessons I learned are priceless. Seeing what goes on behind the scenes of a tv broadcast was really neat. And being able to represent Wheeling Elementary was such an honor. Thanks so much, Super School News! 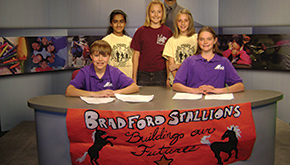 Rose W., Edison Elementary (participated in 2003):
I remember how nervous I was reading my speech in front of my whole 5th grade class. I was trying out to be a reporter on SSN. It was the first time I had felt such a sense of accomplishment when I learned I had been chosen. Being a reporter on SSN was a great starting point for my social skills and was a great introduction to public speaking. Thank you for this opportunity!

Maia W., Bethlehem Lutheran Elementary (participated in 2009):
Seeing the TV studio for the first time was very exciting! The green screen was interesting. Now I know how they swap backgrounds in TV shows.