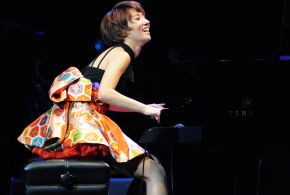 Japanese Jazz on the Auraria Campus

Denver is about to be visited by one of Japan’s hottest jazz groups the Ai Kuwabara Trio. Led by 22-year-old pianist Ai Kuwabara, the band’s music is urban contemporary jazz with a strong, experimental feel and a flavor of funk. The trio shows a regard for a wide-range of musical styles, featuring elements of progressive rock and even pop. They are led by pianist Kuwabara with Yusuke Morita on bass guitar and Shintaro Imamura on drums.

Tune into KUVO’s morning program,” First Take with Lando and Chavis” on Friday, November 16 at 7:35am. Steve Chavis will interview Norman Provizer, Director of Metropolitan State University of Denver’s Golda Meir Center and jazz aficionado about the group’s tour and Denver performance. The Ai Kuwabara Trio performs in Denver on Monday, November 18, 7:30pm at The King Center on the Auraria campus. The event is free and open to the public, courtesy of the Golda Meir Center and the Department of Music at Metropolitan State University, and the Consulate-General of Japan in Denver. The tour is sponsored by the Japan Foundation, Los Angeles.

JFLA chose to bring this particular group to the U.S. in order to showcase the contemporary jazz scene thriving in Japan. Indeed, in September the trio played its biggest show to date at the massive Tokyo Jazz Festival which featured Tony Bennett as headliner. Their latest album “The Sixth Sense” (released in April 2013) was inspired by psychology and cognitive science and was called a “superbly crafted album” by Sean Smith of The Japan Times.