We've highlighted notable works documenting the Vietnam War. Add your own below! 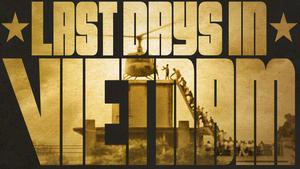 Last Days In Vietnam - American Experience, PBS
April, 1975. During the chaotic final days of the American involvement in the Vietnam War, as the North Vietnamese Army closed in on Saigon, South Vietnamese resistance crumbled. City after city and village after village fell to the North while the U.S. diplomats and military operatives still in the country contemplated withdrawal. With the lives of thousands of South Vietnamese hanging in the balance, those in control faced an impossible decision—who would go and who would be left behind to face brutality, imprisonment, or even death.

LBJ - American Experience, PBS
Lyndon Baines Johnson was one of the most astute, effective, and perplexing politicians in modern American history. An "accidental" president but a master legislator, he was determined to "out-Kennedy the Kennedys" by pushing through historic social legislation on a scale that rivaled FDR's New Deal. A Southerner who championed civil rights, LBJ put into motion many of the programs that would continue to shape American life throughout the 1960s and 1970s, a package of reforms known as the "Great Society." But as his authority was undermined by an increasingly unpopular commitment of U.S. forces to Vietnam, his presidency began to unravel. Opposition to the war spurred protest movements and a youthful counterculture. In 1968 he stunned the nation by announcing he would not seek reelection. A larger-than-life figure in his day, LBJ is appreciated for his vast domestic accomplishments, but his presidency continues to be overshadowed by his failure to end the war in Vietnam

Iconic photos from the Vietnam War - TIME
News photographs showed the world what was going on, from a country full of death in all its gruesome forms to peaceful protests across the ocean. Despite their age, these images have not lost their impact.

Historic Images from Vietnam - CNN
See photos of some of the most dramatic moments of the Vietnam War.

Top 10 War Songs of Vietnam - Next Avenue
Every soldier had his own soundtrack to the war, but these stand out. More...